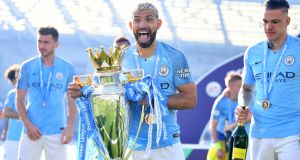 The teams are level seven games in. City play with restraint after two defeats at Anfield the previous season, 3-0 (in the Champions League) and 4-3 (in the league), and their point might have been three but for Riyad Mahrez’s penalty miss. “You know Liverpool will punish our mistakes and at the back we controlled it very well,” Pep Guardiola says.

City lose for the third time in four league matches, after defeats by Crystal Palace and Chelsea, and Guardiola admits: “Now there will be doubts.” Fabian Delph’s late red card sums up City’s frustration after they blow the lead. With Liverpool beating Newcastle 4-0, Jürgen Klopp’s team are six points clear of second-placed Tottenham. “It is too early to talk about us being contenders for the title,” Klopp says.

Liverpool’s 20-game unbeaten run is ended by City, who reduce their opponents’ lead to four points. Sergio Agüero puts City in front, Roberto Firmino equalises and Leroy Sané secures the points when he puts away a cross from Raheem Sterling. Guardiola describes his players as “incredible”. Klopp bemoans the lack of a red card for Vincent Kompany’s first-half tackle on Mohamed Salah: “He is last man and he goes in. If he hits Mo more, he is out for the season.”

City’s eight-match winning run in all competitions comes to an unexpected halt after they go ahead through Agüero on 24 seconds. The game changes when Salomón Rondón equalises midway through the second half; a Matt Ritchie penalty then wins it for Newcastle. Liverpool fans profess their love for Rafael Benítez on Twitter. Their team lead by four points with a game in hand.

The following night Liverpool fail to capitalise. They get a perfect start, Sadio Mané scoring in the third minute, but Harry Maguire equalises in first-half stoppage time. Liverpool feel they should have had a penalty for a challenge by Maguire on Naby Keïta but this is a subdued display. Klopp looks on the bright side: “Still everything is fine.”

The draw takes Liverpool top but Klopp is frustrated by his team’s failure to defeat opponents who lose three players to injury in the first half. “On days when United are beatable you have to do it,” the manager says. “We played around with no speed. We expect to play better football.” Liverpool fail to make a chance of note.

Liverpool need a win to go top but are held on another afternoon when their cutting edge is missing. Salah fails to capitalise on two openings and Klopp refers to the weather in his analysis: “The wind was coming from all directions and did not help anybody.”

Goalline technology shows that Agüero’s shot has crossed the line by 29.51mm to deliver a scrappy victory which takes City back to the top. It sums up the fine margins which will decide the title race and extends City’s impressive response to going out of the Champions League. This is a third win in a row since then, the others coming against Tottenham and Manchester United.

A spectacular 70th-minute goal by Kompany takes City to within touching distance of the title. “I could hear people saying: ‘Don’t shoot, don’t shoot!’” the defender later reflects. “I’ve not come this far in my career to have young players tell me when to shoot.” Kelechi Iheanacho wastes a glorious late chance to equalise.

Briefly it seems City might blow it. With Liverpool leading 1-0 against Wolves, Guardiola’s side concede the opening goal. But they respond swiftly and decisively to lead through Agüero and Aymeric Laporte and secure the game – and back-to-back titles – in the second half.

“It’s a combination of a great group of players, great staff and our incredible desire to overachieve,” Kompany says. “Because we’ve got such a good team overachieving is difficult but we’re looking forward to the FA Cup final now.”