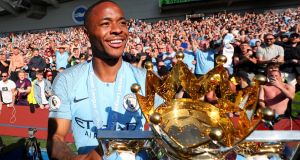 More than just a “gripe”. Since the turn of the year, Arsenal’s Pierre-Emerick Aubameyang has had a banana peel thrown at him, Manchester City’s Raheem Sterling has been racially abused, Liverpool’s Mohamed Salah was subjected to Islamaphobic abuse, Gaëten Bong fell victim to racial abuse and Huddersfield’s Philip Billing was subjected to a similarly mindless attack on social media. Last month, in a special report, Jacob Steinberg revealed that Kick It Out, football’s anti-discrimination organisation, have reported an 11 per cent rise in reports of discriminatory abuse last season. They have also said it is likely the figures will rise again this year. For all his tireless work at this underfunded organisation, the Head of Development and chief mouthpiece Troy Townsend is now called upon to give his take so many different incidents that even he must be getting weary of relentlessly banging the same old drum to apparently avail. The fact that so many media organisations have him on speed-dial is a damning indictment not just on football, but society as a whole.

The ongoing absence of safe-standing

The call for safe-standing in Premier League and Championship grounds has been made here before, but is one that is worth repeating, even though it will almost certainly be ignored because no British politician has the courage to call for changes to the current legislation. A reminder: Arsenal, Manchester City, Manchester United, Tottenham Hotspur and Everton are all in favour of incorporating safe-standing areas in their stadiums, while the introduction of rail seating has also been backed by Crystal Palace, Burnley, Brighton, West Ham, Huddersfield and Watford, among other clubs. Last season, a poll of Liverpool fans revealed 88 per cent of them are in favour of it, while the Football Supporters’ Federation is also wholeheartedly enthused by a practice that has been shown to work perfectly safely abroad. Due to the intransigence of a succession of sports ministers, however, we remain no closer to seeing its introduction in the Premier League.

The proliferation of football in football

Here’s a thought, broadcast networks. If you’re absolutely hell-bent on refusing to spare us Friday night football and Saturday night football, on top of all the other nightly football, why not leave one evening a week sacrosanct and mercifully football free? Gripes of the Season would like to propose Mondays, an evening on which Sky frequently broadcast Monday Night Football, an invariably informative and entertaining mix of chat and analysis that often provides the next day’s headlines, but is habitually spoiled when proceedings are interrupted by a 90-minute kickabout between Burnley and Newcastle that some TV executive decided to schedule in the middle of it. Actual football matches have been the least appealing feature of Sky’s excellent MNF since the departure of Richard Keys and Andy Gray and besides, Newcastle fans probably have better things to do on a dark and dirty Monday night in late November than make the journey to and from St Mary’s.

This is not a drill. The media is not biased against your team. You support them, you buy the match ticket, you wear the shirt and you cheer them on. It’s you who’s biased and the rest of us don’t really care. Naturally, everyone has their own individual preferences and there will almost certainly be individuals who work in the sports media who do not like, or even loathe your team, but the notion that writers, broadcasters, commentators and pundits are all part of one homologous mass that toes a strict set of meticulously thought out party lines is increasingly tiresome. They do not all convene monthly in a dormant volcano to decide that yes, [insert your favourite team’s name here] are getting a little bit too big for their boots and are in need of a slap-down. Truth be told, there are thousands of people working in sports media, many of whom don’t really like each other, who have wildly different opinions on a ridiculous variety of football matters. Apart from the matter of the team you support, obviously. They really don’t like them.

Football life through a lens

Whatever your feelings about Liverpool Football Club, there are few sights and sounds in English football than the Kop in full voice just before or after a big match, giving the closing number from Rodgers & Hammerstein’s Carousel big licks as they hold their scarves aloft. Well, as most of them hold their scarves aloft, while assorted others hold their tablets or phones in the air instead, videoing themselves not really enjoying the moment because they’re overly concerned about the finer technical points of the footage they’ll be boring everyone to tears with once they get home. Watch any penalty, free-kick or even throw-in being taken at any ground and in the background you will see a staggering number of fans watching through a lens despite paying to be there to enjoy the moment. Somebody with better equipment and more production is already recording this stuff for posterity, but your own recording equipment away and just enjoy the game. - Guardian

1 Gordon D’Arcy: Change was advisable before Twickenham; now it is inescapable
2 Kevin Seaward: ‘The first time I wore the Vaporflys, I hated them’
3 Gerry Thornley: Wild reactions to this Ireland team as fickle as the wind
4 Seán Moran: Dublin and Galway make good starts in differing circumstances
5 Cheltenham keeping a watching brief on coronavirus
Real news has value SUBSCRIBE