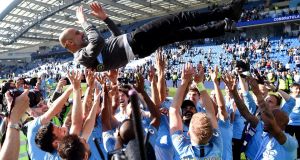 And fade to Blue. On a soft spring south-coast afternoon Manchester City retained the Premier League title, completing their sprint to the line with a 14th straight win, enough to edge out Liverpool’s own chase by the finest of margins.

As the trophy was hoisted by Vincent Kompany, this 4-1 defeat of Brighton felt like a performance that captured a great deal about this champion team – its luminous qualities in attack and midfield; the meticulous work of Pep Guardiola, the way his team plays at all times, win or lose, as Manchester City, unable to do anything other than be itself; and also some of its tensions, the fretfulness that can sometimes creep into the works.

It was a day when time seemed to slow down and speed up depending on the state of play here and at Anfield. The decisive moment came on 63 minutes, as Riyad Mahrez feinted to shoot on his left foot, then turned back on to his right. At which point time seemed to stop altogether.

Before then City had been jittery in a difficult first half. There is a saying in football that the clock is never your friend. Either you are winning and time cannot go fast enough. Or you are losing and the hands start to whizz and whirr, time seeping away, becoming a hostile thing .

So it was during this final game. Early on it took City a while to establish that familiar weather front of pass and move. With six minutes gone Guardiola was already up on his touchline, cardigan-coat flung open, revolving both his hands in a Charleston of tactical angst.

Ten minutes later news came through that Liverpool had taken the lead at home to Wolves. The day was narrowing. Time was against City. And with 26 minutes gone, the afternoon seemed ready to fall apart as Glenn Murray headed in from a corner in the sunshine at the far end to make it 1-0 to Brighton.

The Amex erupted but there was barely time to feel any vertigo before City were level, Sergio Agüero turning in the tiniest of spaces to finish expertly.

Time began to move more quickly. City were still chasing it, right up until eight minutes before half-time when Aymeric Laporte floated above a crowded penalty area to head down and then up into the roof of the net from a right-wing corner.

Tick-tock. Half-time arrived with City 2-1 up and with tensions eased by a period of smothering dominance. This felt like a City performance by now, playing from the front, taking away the ball, making opponents chase.

Then came that moment just past the hour that stopped the clock. Mahrez took the ball and feinted on his left foot. At that point Lewis Dunk simply vanished, throwing himself flat on the grass like an infantryman hearing the whine of a shell. Mahrez does this so often. Still it keeps on working, stealing those vital slivers of time and space.

Mahrez shimmied the other way and with his right foot spanked the most beautiful dipping shot into the far top corner. For a second the air seemed to leave the stadium, sucked up out of the ground and into the blue above the stand.

Then the day was off again, the clock ticking on, the City fans leaping and seething as a great pent-up roar came rolling out of the away end. On his touchline Guardiola capered about before gathering himself and affecting, briefly, a ludicrously nonchalant stroll. And really this was torture for Pep from the start. Famously he cannot even eat on the day of a game, finally forcing down some cubes of cheese long after the final whistle. Instead he frets, great whirring brain churning over the variables of how to control all that time and space.

Title number two will be doubly sweet at the end of all that. For all the noises about just being proud of the process, Guardiola is fiercely protective of his legacy, aware his methods will be judged on the bare numbers. To emerge from this season with no major trophy beyond the League Cup would have been a private disaster. They play Watford in the FA Cup on Saturday.

That City stayed the course is a tribute to the talent in this team, and also to its more basic qualities of will and heart. David Silva was off the pace here, as he has been for a while. Silva has been a great Premier League midfielder. But he is 33 now. Time is calling for him too.

And yet it was deeply fitting Silva should provide the lovely cushioned pass for that key first goal. This team has refused to let its levels drop during the run to the line, but there are weakness and absences, parts missing. Silva has played more than he might because Kevin De Bruyne and Fernandinho, City’s two key midfielders, have been absent. In spite of which the train has kept rolling, the parts clicking together

It is the best part of this team. The City supremacy has not been an organic process. The billions spent are significant. The Premier League has now been won twice in a row by a sublime team that acts as an advertising billboard for the state of Abu Dhabi.

And yet this stands separate from the achievement of the players and staff. It is the paradox of the City team. The only real world star in this set up is the manager. City have not gone out and bought a bolt-on team of proven Ballon d’Or level goal-psychopaths. They did not go for Ronaldo or Messi but invested in fine young players, almost all of whom have been pushed to the outer levels of their talent.

What is left is a lesson in how to coach and build a team, in the human qualities of sport. The celebrations at the end were heartfelt, reward for an effort of collectivism and relentless heart; and for a two-season title team that is now surely among the best English football has seen.

1 Sideline Cut: Vignette shows why Bird is the true shark in The Last Dance
2 Farrell and O’Connell provide insight into changes in Ireland’s analysis
3 GAA preparing for earlier return to activity but pitches to remain closed
4 Brendan Rodgers says he was ‘really knocked’ by coronavirus
5 Decision expected next week on staging of College Football game in August
Real news has value SUBSCRIBE