Pep Guardiola thanks Liverpool for helping City up their game

Manager promises Manchester City will come back even stronger next season 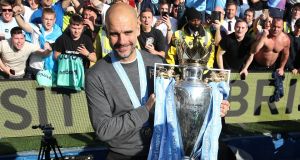 Pep Guardiola thanked Liverpool for pushing Manchester City to new heights this season and, having claimed the toughest top-flight title of his career, warned that his team will return even stronger when they chase a third successive title.

City’s 4-1 victory at Brighton ensured they became the first team in a decade to retain the Premier League, holding off a resurgent Liverpool in the process. The champions will attempt to secure an unprecedented domestic treble on Saturday against Watford in the FA Cup final but, having seen their league dominance challenged by Jürgen Klopp’s side, plans are afoot to strengthen once more.

Guardiola, who has now claimed consecutive championships in La Liga, Bundesliga and the Premier League, had seen his side win the division by 19 points last season, with that lead trimmed to one this time round. “That was the most difficult title because of the quality of Liverpool and the rivalry we faced all season,” he said. “We made 100 points [last season] and had to make 98 this season to retain it, so it means so much. We have to say congratulations to Liverpool, and thanks because they helped us to push and increase our standards.

“By doing what we did last season, we increased the standards of the competition. Teams realised that, but only Liverpool handled it . . . They were incredibly consistent and we needed to win 14 games in a row to be champions. Liverpool helped us to be where we are because, for the last two months, we knew we couldn’t lose a single point. They had an incredible season but we did a little bit better.

“So we’re so, so tired now but, at the same time, winning the title gives you a lot of energy. It’s so addictive. We have the FA Cup final in a few days’ time and we’ll be ready to compete against Watford to win the four titles [including the Community Shield] in one season, but then we’ll prepare well and come back stronger. Liverpool will maintain their levels and the others will be better. Manchester United must come back. Chelsea under Maurizio Sarri will be better. Tottenham are in the Champions League final and Arsenal will be better as well. We accept the challenge and, next season, we will be back stronger, I promise you.”

Guardiola is due to meet City’s director of football, Txiki Begiristain, after the Cup final to discuss transfer plans, with additions anticipated to bolster an already-imposing squad.

“I’ll sit with Txiki and decide what is the best,” said the manager. “Last year we only added Riyad Mahrez and he scored an incredible goal today. So we’ll decide what the team needs now. There are weaknesses. My team are not the tallest of guys, so every set piece [we concede] I go to the church to pray. We defend them with players like Raheem Sterling, David Silva, Bernardo Silva. That is the reality.”

There will be further talks, too, with Vincent Kompany, who is out of contract in the summer after winning his fourth Premier League title. “I don’t know if I’m staying but it’s not on my mind at the moment,” he said. “I want to win and win. Once the season is finished we will talk as a family – all outsiders have no say. It’s between me and my team and my family.”

“We don’t have one player who makes the difference or who scores 50 or 55 goals,” Guardiola said. “We don’t have one guy who dribbles around everyone and scores five goals and so we have to do it as a team. That’s the secret. Maybe people have a few doubts whether they will be motivated after last year and, after the World Cup in the summer too, we were worried. But we pushed each other and I pushed myself. They follow us, they follow me.

“The only way we could achieve this was together. Winning two in a row is incredible. It will be tough again next season, but I have a feeling we can come back even stronger still. The big competitors are never satisfied. It’s never enough.”