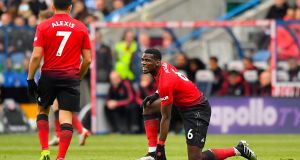 Manchester United’s Paul Pogba and Alexis Sanchez will be in a hurry to forget this season. Photograph: PA

A purple patch following José Mourinho’s sacking aside, it has been a truly disastrous season for United. There are any number of overriding images from this latest sorry damp squib – Alexis Sánchez, whose £490,000-a-week wages translate to an hourly rate of around £2,900, skulking around nonplussed, Fred floundering in countless midfield duels, Paul Pogba strutting round and simultaneously causing Roy Keane to self-combust, an off-colour David de Gea making yet another uncharacteristic error or the grimace on the face of Phil Jones. Take your pick, it has been a torturous time. The final descent of Mourinho’s reign was spectacularly sullen but, six months on, things are not much better. Ole Gunnar Solskjær has declared this as the end of the road for some players – Sánchez’s limp down the tunnel at Huddersfield was symptomatic of an entire campaign – and, in truth, the chance to start over cannot come soon enough.

Signed for £17m last summer, the winger is Brighton’s club-record signing but has badly struggled to live up to that fee. A quick glance at his numbers says it all: this time last season, Jahanbakhsh was heading into the World Cup with Iran off the back of a glittering campaign in which he scored 21 goals for AZ Alkmaar. Not only have the goals dried up, they have been non-existent, with Jahanbakhsh still to register a single goal or assist for Chris Hughton’s side. He has completed 90 minutes just three times in what has been a difficult season, punctuated by niggling injuries and compounded by conceding a soft penalty at Arsenal earlier this month. The 25-year-old studied to become an auto mechanic before turning professional in the Eredivisie and, despite stalling in his maiden season in Sussex, Hughton has expressed confidence Jahanbakhsh will fare better second time around.

For an entourage of Everton officials, deadline day last August was spent in Catalonia. A lot of effort went into frenetically arranging meetings, medicals and signing off paperwork as they got a £28m deal for Mina and a season-long loan for André Gomes over the line. Everton are yet to fully reap the rewards of that labour.

Mina formed a trio of headline arrivals from Catalonia, with Lucas Digne having already signed from Barcelona. Gomes and Digne have enjoyed excellent campaigns but the same cannot be said for the towering Colombia defender. Mina did not start a game for Marco Silva’s side until November because of a foot problem and has not featured since March following a hamstring injury picked up on international duty. Mina has not become useless overnight but his first season at Everton has been desperately disappointing.

That there is, a rather cruel, 10-minute montage of Mustafi’s mistakes doing the rounds speaks volumes. The Arsenal defender has too often proved a defensive liability, typified by his hopeless display in defeat against Crystal Palace, when he gifted away not one but three goals. On the face of it, signing Mustafi for £35m three seasons ago appeared a masterstroke, a player Arsène Wenger had been crying out for. Arsenal had snapped up a World Cup winner, someone with – stereotypically at least – all of the desired attributes synonymous with a German centre-back. He seemed a cure to their decade-long defensive woes. What Arsenal really acquired was a flimsy imitation of a top-quality defender. For Mustafi, along with Denis Suárez, who mustered up just four substitute appearances after being borrowed from Barcelona in January, it has been a poor campaign.

After being touted for a move to Barcelona and Borussia Dortmund, when the £25m midfielder rocked up at Aldershot Town last summer for a Fulham pre-season friendly, his arrival was greeted with considerable fanfare. Seri’s signing was supposed to be a major coup but, barring the odd glimpse of class, Fulham must feel short-changed. Before a ball had been kicked, Fulham fans were giddy at the prospect of Seri, and the raft of new faces, catapulting them into the upper echelons of the Premier League. Therein lies the problem. Seri has little appetite to play in England’s second tier, and André-Frank Zambo Anguissa, another who endured a miserable debut season, led to the break-up of a trusty three-man midfield that had Fulham purring in the Championship: Tom Cairney, Kevin McDonald and Stefan Johansen. They could do worse than leaning on that trio again next season. For Seri, signed from Nice, a return to Ligue 1 surely beckons.