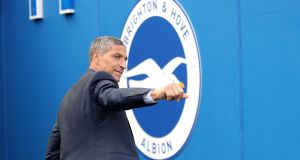 Seagulls chairman Tony Bloom said: “Undoubtedly, this has been one of the most difficult decisions I have had to make as chairman of Brighton & Hove Albion, but ultimately one I have made due to how we struggled in the second half of the season.

“Our run of three wins from 23 Premier League matches put our status at significant risk. It is with that in mind, and the performances during that period, that I now feel it’s the right time for a change.”

Hughton replaced Sami Hyypia at the Amex Stadium in December 2014, with Brighton just above the Sky Bet Championship relegation zone.

After defeat in the play-off semi-finals in 2016, Hughton led Albion to promotion the following season with a second-placed finish.

He also guided the club to only their second FA Cup semi-final earlier this season.

“Chris has done an excellent job over the past four-and-a-half years,” said Bloom.

“First stabilising our club, reaching the play-offs in his first full season, securing our first-ever promotion to the Premier League, and retaining our status in two successive seasons.”

1 Gordon D’Arcy: Change has to happen before Ireland's trip to Paris
2 Solskjær says United ‘suffer’ when absent from Champions League
3 Dan Tuohy explains ‘rotten to the core’ comments
4 Kevin Seaward: ‘The first time I wore the Vaporflys, I hated them’
5 Koepka takes opposite stance to McIlroy on proposed Premier Golf League
Real news has value SUBSCRIBE