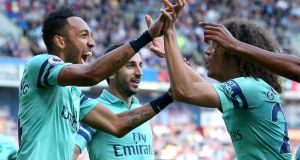 Arsenal striker Pierre-Emerick Aubameyang scored a second-half brace to help the London club finish their Premier League campaign with a 3-1 victory at Burnley on Sunday that left them fifth in the table.

Aubameyang opened the scoring against the run of play in the 52nd minute, latching on to a poor backpass from Burnley’s Jack Cork and slotting the ball past goalkeeper Tom Heaton.

The Gabon international, who hit the post and forced a sharp save in the early stages of the feisty clash, doubled his tally 11 minutes later by meeting Alex Iwboi’s searching cross with a superb volley at the back post.

Burnley were not ready to give up without a fight, however, and pulled a goal back two minutes later when Ashley Barnes nodded in Johan Gudmundsson’s cross from the left.

They pushed for an equalising goal and went close through substitute Peter Crouch, but it was Arsenal who scored again through teenager Eddie Nketiah in added time to secure the win and finish the season with 70 points.

Aubameyang, who wasted another clear opportunity to add to his impressive league tally, finished with 22 goals alongside Liverpool forwards Mohamed Salah and Sadio Mane at the top of the scoring charts.

Tottenham were denied a fourth successive Premier League top-three finish as they were held to a 2-2 draw by Everton.

Spurs could have finished as the best of the rest behind the incessant Manchester City and Liverpool if they had bettered Chelsea’s score at Leicester, but they had to make do with fourth position.

They needed a fine Christian Eriksen free-kick to earn a point in the 75th minute after quickfire goals from Theo Walcott and Cenk Tosun had cancelled out Eric Dier’s early opener.

The point does at least guarantee Champions League football next season, regardless of what happens in Madrid when they take on Liverpool in the culmination of this season’s European Cup.

Spurs will be glad to see the back of the Premier League as they have limped over the line, with just three wins in their final 12 games.

But finishing in the top four, still with the prospect of winning a first-ever Champions League, has to be regarded as a fine achievement by Mauricio Pochettino’s side given the circumstances they have come up against this season.

Everton’s pursuit of seventh had ended last week and they face a summer of trying to find a way of breaking the top-six’s dominance.

Eden Hazard failed to inspire Chelsea as they wrapped up third in the Premier League despite being held at Leicester.

The Belgium international came off the bench in what could be his final Premier League appearance for the Blues with Real Madrid waiting but could not break the deadlock in a forgettable 0-0 draw.

With the Europa League final against Arsenal at the end of the month Hazard played just 22 minutes at the King Power Stadium.

Tottenham’s 2-2 draw with Everton secured third for Maurizio Sarri’s side but they still finished a mammoth 26 points behind champions Manchester City.

Already-relegated Fulham’s season in the Premier League came to an end with a whimper rather than a bang on Sunday as they were hammered 4-0 at home by Newcastle United.

Scott Parker, now in charge at Fulham on a full-time basis, now faces the task of engineering his side’s return from the second-tier Championship after ending the season in 19th place.

Shelvey smashed in his first goal of the season in the ninth minute, bringing down a high corner kick outside the area before unleashing a thunderbolt over the heads of the Fulham defenders and beyond the reach of keeper Sergio Rico.

Perez doubled the visitors’ lead two minutes later when Rico parried a shot from Mohamed Diame straight into the path of the Spaniard, who deftly flicked in his 12th goal of the campaign.

Newcastle’s Schar headed in a Matt Ritchie corner in the 61st minute, and Rondon snuck in a fourth shortly before the final whistle, bursting into the area and firing straight into Rico’s chest before directing the rebound into the far corner.

West Ham captain Mark Noble netted a goal in each half as West Ham beat Watford 4-1 on the final day of the Premier League season, leap-frogging their opponents to claim 10th spot in the table with 52 points.

With next week’s FA Cup Final against Manchester City still to come, Watford’s defending was noticeably lacking in intensity and they ended the league season two points further back in 11th position.

Noble put the visitors ahead in the 15th minute and Manuel Lanzini made it two shortly before halftime, heading into an empty net with the defence caught flat-footed after Michail Antonio thumped a shot off the crossbar.

The second half had barely gotten underway when Gerard Deulofeu pulled one back for the home side, snapping up an under-hit back pass by Pablo Zabaleta and poking the ball past the onrushing Lukasz Fabianski before firing it into the net.

Any hope of a Watford comeback was snuffed out when Greek full-back Jose Holebas was shown a straight red card for his last-ditch tackle on Antonio, which will see him suspended for the cup final next week.

Watford seemed incapable of learning from their mistakes, and West Ham’s third came from another rebound, Marko Arnautovic firing his 10th of the season before Noble rifled home a penalty to complete the rout 12 minutes from time.

Michy Batshuayi gave Crystal Palace further cause to make his signing permanent after he scored twice to inspire a 5-3 home victory over Bournemouth.

The striker has impressed since his arrival on loan from Chelsea, netting six in 13 appearances for a team that had previously struggled for goals.

Batshuayi will now return to Stamford Bridge unless Palace can find what is likely to be a club-record transfer fee to retain him.

Palace lost the similarly influential Ruben Loftus-Cheek in near-identical circumstances a year ago and are still to convincingly replace him, despite a final-day win to conclude a more impressive season in which they have finished an encouraging 12th.

Defeat represented Bournemouth’s eighth from their last 14 games, and a continuation of the struggles that began in November which, if not arrested, will quickly leave them threatened by relegation when the next Premier League season begins.

Eddie Howe’s team slid to 14th after being overtaken by Newcastle — 4-0 winners at Fulham — and were largely flattered by their three goals.

Relegated Huddersfield avoided equalling the record for most defeats in a Premier League season by coming from behind to draw 1-1 at Southampton.

But a mistake from Saints goalkeeper Angus Gunn allowed Alex Pritchard to equalise 10 minutes into the second period and earn Town their first point on the road in four months.

Jan Siewert’s side, whose return to the Sky Bet Championship was confirmed six weeks ago, could have been two goals down at that point as James Ward-Prowse rattled the woodwork from distance minutes earlier.