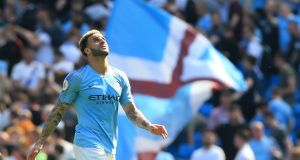 At last some cracks are showing. This has been a title race characterised by the implacable excellence of one runner and the tumultuous late comebacks of the other. It has been easy to categorise Manchester City against Liverpool as control against chaos, rationality against emotion, Apollo against Dionysius. But at the Etihad on Saturday it was fraught and raw, City put under pressure by a patched-together Tottenham side – but they prevailed.

Two victories by a one-goal margin over Spurs in the space of four days has extended City’s run to 16 wins in 18 games (and one of those other two games was the draw in the Carabao Cup final before a win on penalties) but that gives only the slightest sense of what this week has meant.

There had been a theory that City, focus renewed after the VAR-related agonies of Wednesday, would crush all before them on their way to a domestic treble – just as last season their reaction to a Champions League quarter-final exit was the relentless pursuit of 100 points. That may yet happen, but they have rarely looked less like a machine, more human, than they did on Saturday. Which is great for the spectacle, if not for the nerves of Pep Guardiola or City fans.

Perfection may be admirable but the potential for failure is far more engaging. The most memorable of Nick Faldo’s three Open triumphs was not the 18 straight pars in the final round in 1987 or his wire-to-wire success in 1990, but his collapse and recovery that left him a sobbing wreck on the final green in 1992. For those of us in early middle age there has never been, nor could there conceivably be, a more dramatic sporting event than Dennis Taylor’s miss-strewn victory over Steve Davis in the final of the world championship in 1985.

Run-ins are supposed to be difficult. Players are supposed to tense up. By this stage it is meant to be as much about bottle as it is about ability. City looked fallible. The passing was off. It was not as slick as usual. The patterns were not so purposeful.

City at their best have often seemed machine-like but they have never been some kind of war-engine blindly steamrollering opposition; rather the mechanism that drives them is fine and precise and that means that it is prone to becoming gummed. What was perhaps most telling was the way the crowd, which at times seemed to be undergoing some sort of Alan Ball-era flashback, spent the final minutes howling for the ball to be hoofed forward and out of danger. That, though, is not the Guardiola way – even if there were certain players who seemed markedly reluctant to accept the ball under pressure in their own half.

Even more worrying, perhaps, was the way simple long balls caught City out again and again. Tottenham had half a dozen clear chances, plus a plausible shout for a penalty, and all of them came from runs between or behind the two central defenders. The positioning of the back four as a whole was problematic. Often it was too high and again and again the space between John Stones and Aymeric Laporte, or Stones and Kyle Walker, was wide enough to leave City vulnerable.

It is hard to put that down to nerves – a lack of preparation time in the current rush of fixtures is a more likely explanation – but the impact was to leave City looking as exposed as they often were in Guardiola’s first season at the club.

While more sanguine City fans, perhaps, will contentedly tick off another obstacle overcome, one that has for a long while loomed as one of two major hurdles along with Wednesday’s Manchester derby, and reflect that four more wins will guarantee the title, others will begin to fret that Burnley and Leicester do not seem quite such straightforward opponents as they did a month ago, even if neither has a huge amount left to play for.

Liverpool’s greatest achievement this season, perhaps, is to push City hard enough in the title race that their mettle is being tested as well as their ability. - Guardian