Win over Fiorentina seals title win for Juve with five games to spare. 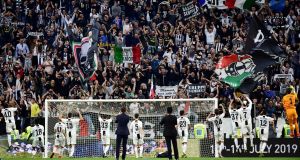 The Juventus players celebrate winning the league after the match. Photograph: Massimo Pinca/Reuters

Juventus came from behind to beat Fiorentina 2-1 and secure the Serie A title for an eighth successive season.

Massimiliano Allegri’s side had missed the chance to wrap up another Scudetto last weekend after an unexpected 2-1 defeat away at Spal.

Having seen their Champions League hopes ended in midweek by Ajax, the European hangover appeared to be lingering as Nikola Milenkovic fired Fiorentina into a sixth-minute lead.

After riding their luck when a goal from Giovanni Simeone was ruled out for offside, Juve equalised in the 37th minute through Alex Sandro.

The home fans at the Allianz Stadium were in full voice again when defender German Pezzella knocked a low cross from Cristiano Ronaldo into his own net in the 53rd minute.

Juve had started the latest round of fixtures some 17 points clear of second-placed Napoli with six games remaining and also holding a better head-to-head record.

However, Allegri’s side — missing several players including Sami Khedira, Mario Mandzukic, Paulo Dybala and Douglas Costa — were caught out by a fast start from La Viola.

Federico Chiesa darted into the right side of the penalty area, and although Wojciech Szczesny made a save down at the near post, the ball broke loose and Milenkovic drilled his shot in from close range.

The Poland goalkeeper picked up a hand injury during the scramble in the six-yard box, but was able to continue.

Fiorentina remained on the offensive as Kevin Mirallas fired over and continued to threaten on the counter.

The visitors had the ball in the net again after 26 minutes, but Simeone was clearly offside as he turned in Mirallas’ low cross.

Chiesa was then denied by the woodwork after his curling shot came back off the post following another swift break.

Juve equalised against the run of play in the 37th minute when full-back Sandro guided a diving header in at the near post from a corner.

Fiorentina continued to press and struck the woodwork again just before half-time when Chiesa’s powerful left-foot drive flew past Szczesny but came back off the underside of the crossbar.

Juve came out with renewed purpose for the second half, and were in front in the 53rd minute.

Ronaldo got away down the right and his low cross through the six-yard box was diverted into the net by Pezzella as Bernadeschi looked set for a tap in.

In stoppage time, Szczesny made a smart save with his boot after midfielder Bryan Dabo had been played clear as Juve closed out another victory and title success.