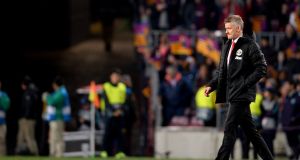 Ole Gunnar Solskjaer believes some members of his Manchester United squad need a “reality check” ahead of a potentially pivotal next few weeks for the club.

A 3-0 humbling at the hands of Barcelona in midweek saw United knocked out of the Champions League at the quarter-final stage, which meant they have now lost five of their past seven matches.

United face a battle to qualify for Europe’s elite club competition next season but while Solskjaer is satisfied with the attitude of the majority of his squad, he delivered a remarkable broadside at others.

Speaking ahead of this weekend’s Premier League visit to Everton on Sunday, the United manager said: “I’ve learned a lot about them over the months I’ve been here now.

“You get to know them, most of them have really impressed me in their attitude and there are some that need to get a reality check on where they’re at.

“When you’re out there, there is no hiding place, you can’t hide and everyone can see where your levels are at.

“We’re also working on training here with a fantastic staff I’ve got to create this culture that we want.

“You’ve got players to take ownership of what’s happening here as well. But of course it’s the performances on the pitch which will determine where they’re at in their careers. But most of them know they can improve if they keep working as they do.”

One of those who attracted Solskjaer’s discontent is Anthony Martial, who signed a new five-year contract in January but has delivered a string of underwhelming performances in recent weeks.

“Anthony’s got a massive talent, he’s signed a new contract, he knows that we believe in him so just keep on working.

“I think anyone that plays for Manchester United has to deliver to stay in the squad and stay in the team. Anthony’s no different to (Marcus Rashford, Romelu Lukaku, Alexis Sanchez) or the many forwards that we have to choose from.”

Solskjaer faces a summer of upheaval as he looks for United to challenge on both domestic and European fronts once again.

However, the former United striker warned a spate of signings will not act as a panacea.

Solskjaer said: “We know we have to be realistic here and we know we have a job to be done. There’s no quick fix, it’s not like we buy seven players and suddenly we’re in the right shape, we are where we are.

“We have to take it step-by-step and of course there will be signings made in the summer.”

Solskjaer and his troops have no time to dwell on the Barcelona defeat with three crucial clashes in the space of eight days coming up, starting with their trip to Goodison Park.

The Manchester derby at Old Trafford on Wednesday is then followed by Chelsea’s visit on Sunday week in a run of fixtures that could go a long way towards defining United’s campaign.

Solskjaer, who revealed midfielder Ander Herrera is back in training, said: “You have to get on with it quickly, just accept we’re out of the Champions League. There is no shame in going out to Barcelona.

“We spoke about it after the game and said we want to be here again. To be back at these stadiums, we need to get among the top four.

“It’s a fantastic week to look forward to. The players are in a good state mentally and they’re strong mentally.”