‘It is maybe a yellow card, but red card? I don’t understand why the referee did it’ 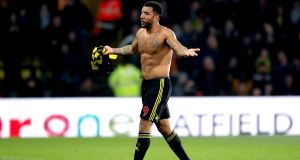 Watford head coach Javi Gracia was left perplexed by the decision to send off Troy Deeney during the early stages of his side’s Premier League defeat to Arsenal.

The Hornets saw their skipper dismissed with 11 minutes on the clock during the 1-0 defeat at Vicarage Road after referee Craig Pawson liaised with his assistant before brandishing the red card following a challenge on Lucas Torreira — with replays suggesting his forearm struck the midfielder in the face.

Arsenal had taken the lead less than two minutes earlier as Pierre-Emerick Aubameyang pounced on Watford goalkeeper Ben Foster, who was dallying in possession, to score the only goal as the Gunners picked up a rare away win to return to the top four.

But it was Deeney’s red card which left Gracia scratching his head as his players then still dominated the game despite Arsenal’s numerical advantage.

“I don’t agree, but I respect the referee’s decision,” said the Spaniard.

“It is maybe a yellow card, but red card? I don’t understand why the referee did it.

“What can I say? I don’t understand the decision but we respect it. We tried to look for the resolution.

“There is a contact but it is not with his elbow, it is with his arm or hand, I don’t know which part exactly.

“I never saw an aggressive movement. I don’t understand why the referee took that decision.”

Watford would go on to strike the woodwork twice as Gracia’s FA Cup finalists still outshone their visitors even with Deeney back in the dressing room.

Arsenal boss Unai Emery has been batting away questions over the club’s poor away form in recent weeks.

He takes his side to Italy for the second leg of their Europa League quarter-final clash with Napoli on Wednesday having picked up just a sixth away league win over the season — and their first since winning at rock bottom Huddersfield on February 9th.

“The three points is, I think, the most important thing today,” he said.

“But also, I think we worked well being consistent in our structure, defending their long balls and set-pieces.

“Here they are a very strong team at doing that. After, with the ball I wanted to do better, I wanted to control better with the possession of the ball and with one player more on the pitch.

“We needed to defend in the last minutes, very close with everybody to their good action in the long balls, and the second action to be good in defensive moments.”

1 Gerry Thornley: After 32 weeks the Six Nations is back up for grabs
2 Stockdale and Ringrose on board with expansive Irish game plan
3 Allianz Football League permutations: Who needs what?
4 Captain Fernandes for Man United as PSG look for revenge
5 Ken Early: Project Big Picture endangers cushy position of ‘bottom 14’
Real news has value SUBSCRIBE