Salah not Hazard provides the sparkle as Liverpool keep their footing 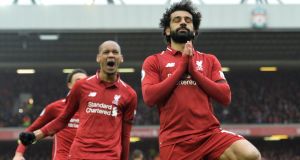 There is no doubt that Eden Hazard is one of the most exciting attacking players in the Premier League but this match made interesting viewing for all those Chelsea supporters pleased to see him used through the middle. His opportunities were extremely limited in that role whereas, when Chelsea went two goals down and sent on Gonzalo Higuaín as the main striker, Hazard was noticeably more effective when operating from wide left.

Twice around the hour mark Hazard had clear chances to rescue something from the game. He failed on both occasions, though at least he had the chances. While playing centrally he had been barely involved, yet when cutting in from the left he first managed to stay onside to find himself with only Alisson to beat, clipping the ball past the goalkeeper but seeing it rebound from a post, then within two minutes he met a cross from Willian in front of goal but could produce only a tamely scuffed shot.

Jürgen Klopp was so concerned at the progress Chelsea were making when they should have been resigning themselves to defeat that he sent Georginio Wijnaldum on to shore up the midfield. After a glorious 20-minute period after the interval when the game actually looked like a contest between two of the most entertaining teams in the country, it had the effect of returning the delicate balance of the first half, when both sides played too cagily to bring the crowd to life.

Hazard spent the first half coiled like a spring, waiting for the chance to become involved. He was the player Chelsea were always trying to find, though hopes of him carving through the Liverpool defence in the manner he did so heroically against West Ham United were always slim. For one thing Liverpool are not West Ham, they have the tightest and meanest defence in the top flight. For another Chelsea’s formation was so compact, essentially two lines of defence behind Hazard with Willian and Callum Hudson-Odoi only occasionally getting forward in support, that the visitors’ most prominent attacker was actually stationed in his own half much of the time, vainly hoping to launch counter strikes from just behind the centre circle.

Unsurprisingly it never really happened for Hazard or for Chelsea. He did turn Joël Matip inside out on one occasion before shooting straight at Alisson but the ball rarely reached either goalmouth before half-time and excitement at either end was in short supply. Antonio Rüdiger and even Virgil van Dijk spent much of the first period simply hoofing the ball away from danger, because the wind was making it difficult for either side to play the precision passing game they normally favour. Liverpool were unable to break at the speed they prefer, which was making life easier for Chelsea’s defence, and the game might have remained a disappointing stalemate but for the home side taking a more direct approach after the break.

Steven Gerrard famously slipped in this fixture five years ago, presenting Demba Ba with a goal and in effect handing Manchester City the title, but Jordan Henderson proved more sure-footed when stepping up to play a captain’s role in Liverpool’s opening goal. Mohamed Salah was being blocked from entering the penalty area on the right when Henderson suddenly appeared at his shoulder to take over, driving to the dead-ball line and chipping a cross to the far post to make Sadio Mané a present of his 18th league goal of the season.

The decisiveness of the strike was at odds with all the cautious play that had gone before and, as if to underline the fact, Salah himself added an audacious second goal a couple of minutes later. The Egyptian may have underwhelmed at times this season compared with last but this was up there with the very best of his Liverpool goals, turning inside Emerson on the right and arrowing in a left-foot shot from the angle of the area that Kepa Arrizabalaga had no chance of stopping. Klopp had mentioned beforehand that, while he respected Chelsea’s array of world-class players, Liverpool had some of their own for their opponents to worry about.

Just like Hazard, Salah can be close to unplayable at times and he possesses the same ability to threaten from just about anywhere on the pitch. He provided the sparkle on this occasion that Hazard could not quite manage, though with a tiny bit more composure from the Chelsea player in front of goal it could have been so different. One would happily have put money on Hazard scoring with his first opportunity once he had brought the ball under control and, regardless of the other chance he missed, a Chelsea goal with 30 minutes remaining would have completely changed the nature of the game.

Perhaps a reminder that Hazard is only human is an encouraging sign for Liverpool in their quest for a title, in the same way that Gerrard proving fallible five years ago was a sure indication that on that occasion it was not to be. Liverpool are back at the top of the league with four games remaining, all of them against sides outside the top six. Even four more victories will not be enough unless Manchester City drop points but what Liverpool need to do now is what City did five years ago and keep winning. This was the game in the run-in that supporters were most worried about but it turned out to be a fifth win in a row thanks in part to Hazard missing a golden chance. All Liverpool can do is keep going and keep hoping. Who knows, this season it could be City’s turn to slip up.