Man United go with Rashford at centre forward against Barcelona 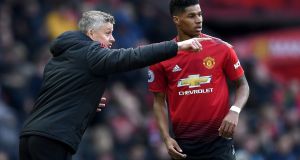 Marcus Rashford starts up from for Manchester United in the second leg of their Champions League quarter-final against Barcelona at the Nou Camp. Photograph: Gareth Copley/Getty Images

Alexis Sanchez was named on the bench as Marcus Rashford returned to Manchester United’s starting line-up for the second leg of their Champions League quarter-final against Barcelona.

Sanchez has missed the last six weeks because of a knee injury while Rashford and Scott McTominay return to the XI, having been rested for the 2-1 Premier League win over West Ham at the weekend.

Ashley Young should slot in at left back in the absence of the suspended Luke Shaw while Phil Jones could be on the opposite flank as United attempt to overturn a one-goal deficit at the Nou Camp.

Sergi Roberto returned from injury to replace Nelson Semedo at right back in the only change from the Barcelona side that triumphed 1-0 at Old Trafford last Wednesday.

That meant Philippe Coutinho started ahead of Ousmane Dembele, who made his first start in a month in the goalless draw at Huesca at the weekend.