Ken Early: What is PSG's cause or do they even have one? 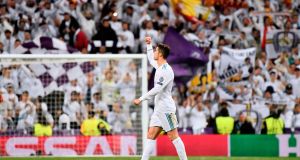 It takes something out of the ordinary to get the most spoiled supporters in the world this riled up. The roars around the Bernabéu told you that Real Madrid really do not like Paris Saint-Germain. Few hatreds are more bitter than that of the aging aristocrat for the youthful parvenu.

Last summer Madrid wanted Kylian Mbappé to be their new galáctico. The deal should have been simple, then PSG offered far more than Madrid could afford. Madrid are not used to being pushed around by anybody and their resentment fuelled a desperation to see PSG put back in their place. It was the same emotion that fired up Anfield when Liverpool played Chelsea in the 2005 Champions League semi-final: you ain’t got no history.

Fans are more likely than the footballers themselves to dwell on football history; the players are young and their memories don’t stretch back very far. When players are asked something about history in the build-up to a big game, their eyes glaze over as they give some mechanical response like “history doesn’t count for anything out on the pitch”.

But there are wise and experienced voices who say that it does.

One of those voices was heard last week from the deserts of Qatar where Xavi Hernandez, the best midfielder of his generation, is playing out the last few months of his lucrative contract with Al-Sadd SC.

In Xavi’s view, Madrid’s ingrained sense of entitlement to victory was what decided the match in their favour.

“Prestige weighs heavily in games like this,” he told the French magazine, So Foot.

“The team that wins the Champions League will be the team that has the most footballers who demand the ball in difficult moments. This may be the problem of PSG or City. Aside from prestige, they may not have the same references to winning as clubs like Bayern or Real. In these historic clubs, resistance to pressure is an integral part of the DNA. They live daily with the obligation to win. PSG is starting to know a little bit about it, but it’s a long learning.”

Xavi’s core idea about Real Madrid is that they don’t really understand football and in fact have little interest in understanding it. The only thing they understand and care about is winning: “Madrid don’t play, they win”.

A few weeks ago, the sage of Doha went deeper into the differences between Barcelona and Real Madrid in an interview with Diego Torres of El País.

“Barcelona is the most difficult and most demanding club in the world. Madrid doesn’t have the same neat football. If their defender boots the ball into the stands it’s fine. That’s the culture. People applaud. At the Camp Nou if you do that there are already noises in the crowd . . . At the Bernabeu, the demand is to give your all. They can’t stand lazy players. Their reference is the spirit of Juanito. The culture of Madrid is the spirit of Juanito or Camacho.”

Most football fans, if asked to name a player emblematic of Real Madrid, might choose a genius like Alfredo di Stefano or Cristiano Ronaldo rather than a battler like Juanito or Camacho. But you have to factor in that Xavi talks about Real Madrid much the same way Captain Ahab talked about Moby Dick, who shared with Madrid “that ghastly whiteness… which imparts such an abhorrent mildness, even more loathsome than terrific, to the dumb gloating of their aspect.”.

A great coach would give them a sense of mission, but PSG have Unai Emery

“It’s been 30 years since Real Madrid started to play all their matches like an arm wrestle,” he told So Foot. “They live every encounter as a duel. They look you right in the eye and challenge you. Do you want to attack? Go ahead, so will we – but if you don’t score, we will.”

What was the change that happened 30 years ago?

In 1988, Madrid were dominating Spanish football with their “Quinta del Buitre” team, with Spanish talent like Emilio Butragueño, Míchel, Martín Vásquez and Sanchis alongside the brilliant Mexican striker Hugo Sanchez. The side was known for a reckless commitment to attacking football that won them five successive league championships in Spain but could not deliver the European Cup by which all Madrid sides are measured.

In fact, the transformation three decades ago took place not at Madrid, but at Barcelona. 1988 was the year that Johan Cruyff returned as coach and began to take their football in a new direction. This was when the duality Xavi talks about became established, the opposition between Barcelona as the idealistic artists, the spirit of life as expressed through football, and Madrid as the soulless terminators, the white death.

It was Barcelona that changed, and if they began to see Madrid as a kind of brainless cult of victory by any means, that was because Cruyff needed to define the enemy they were fighting against. Xavi has grown up with this idea and has internalised it.

The fact that it leaves out much of what is great about Real Madrid is beside the point. The point is that at the very highest and most competitive level of football, it helps to have a cause.

It was never just about trophies for Xavi. He was out to prove so many things: that Barcelona’s way of playing was the best in the world, that you didn’t need to be big and strong to dominate in midfield, that there was nothing lacking in the mentality of Spanish footballers, and so on. Xavi was a brilliant talent but without these higher goals he could not have had the determination to achieve all he did.

PSG can keep beating Madrid and Barcelona in the transfer market, at least for players whose agents prioritise money over football. But even if the signings of 2018 prove to be as stunning as those of 2017, it’s hard to see how they can reach the level of those clubs on the field while they don’t stand for anything more than the idea of delivering the Champions League for Qatar.

A great coach could give them a sense of mission, but PSG have Unai Emery, who gives the impression he doesn’t believe he still has the confidence of the club.

Perhaps a great player could do the same, but PSG’s leader is Neymar. The week before they played Madrid, Neymar was excused a day’s training and a cup match because he needed a couple of days to get through the extensive programme of celebrations that had been organised for his 26th birthday.

There are those who argue that to criticise Neymar for this is mean-spirited and stupid; he’s physically fit and playing well, if it helps him to relax and doesn’t affect his performance, what is the problem?

No doubt many of the same people argued that Neymar was right to leave Barcelona, to escape “the shadow” of Lionel Messi and forge his own destiny at a team that would be built around him as its main man. So he’s no longer one of the boys, he’s supposed to be the leader. And as long as the leader puts birthday parties ahead of work, you wonder how he can ever persuade his followers to see their mission as the most important thing in the world.