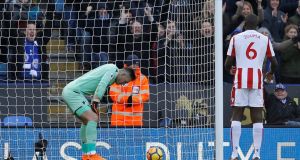 Stoke remain in the relegation places after an error from goalkeeper Jack Butland meant they had to settle for a point from a 1-1 draw with Leicester.

Paul Lambert’s team looked set to climb out of the bottom three ahead of the Saturday afternoon Premier League fixtures after Xherdan Shaqiri’s lovely first-half finish put them ahead.

However, Butland gifted Leicester an equaliser with an own goal midway through the second half when he misjudged a Marc Albrighton cross.

Leicester had late opportunities to take all three points and hit posts twice but the early kick-off at the King Power Stadium finished all square.

The Foxes made a high-tempo start and put Stoke under some early pressure with a series of corners.

The last presented Matty James with a shooting opportunity but he was unable to keep his effort down.

Stoke were also full of energy early on as they pressed high up the pitch and when Badou Ndiaye won possession on the edge of the Leicester penalty area after 12 minutes, his curling effort brought a decent save from Kasper Schmeichel.

The game became a little scrappy as the first half wore on, as both teams struggled to keep the ball, and such an instance allowed Stoke to strike two minutes before half-time.

Wilfred Ndidi tried too hard to keep the ball in play on the touchline midway inside his own half and Joe Allen nipped in and got a pass away infield to Shaqiri, who was in lots of space.

The Stoke forward advanced towards the penalty area before beating Schmeichel with a low curling effort from 22 yards out.

It was a blow for Leicester so close to the break but the hosts responded well at the beginning of the second half, putting Stoke under pressure once more.

But, just like at the start of the match, the visitors dealt with the danger.

Schmeichel took a free-kick from a wide position but his distribution was uncharacteristically poor and the ball went straight to Allen, who passed it to Shaqiri.

With the goalkeeper well out of position, Shaqiri shot from 40 yards out but his effort curled agonisingly wide as Schmeichel scrambled back.

The Dane survived his error but at the other end Butland was not so fortunate in the 70th minute.

When Albrighton drilled in a cross from the right-hand side of the penalty area, it looked like a routine take into the midriff for Butland. However, the ball struck his body and went into the net.

He went some way to making amends shortly afterwards with a superb save to deny Riyad Mahrez. When play developed from the rebound, Harry Maguire struck a post with a fierce shot.

A last-ditch tackle from Kurt Zouma thwarted Mahrez once more and from the resulting corner James’ header hit the same post Maguire had struck shortly before.

In the end Stoke were holding on but Lambert may feel his team did enough to earn a vital win.