Manchester City starlet on training alone on streets of Moscow 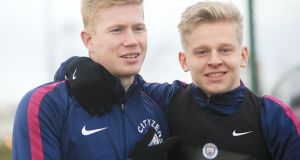 Zinchenko, 21, is set to start Sunday’s Carabao Cup final against Arsenal alongside the Brazilian and, when a youth team player at Shakhtar Donetsk, Fernandinho showed the kind of character required to be an elite professional.

Zinchenko says: “Everyone here [at City]is a superstar and I could not choose just one of them but for me Fernandinho is No 1. When I was in Shakhtar he got a serious injury in 2010 – he broke his leg in a game I was watching – and I remember the moment. I was 14 or 15 and every doctor told me he was finished: at best after his recovery, he would go to play in Brazil for a few years and that’s all.

“But he trained with us in the youth team and then after eight months he was back playing with the first team. I went back to the doctor and asked him what he had said at the time! This guy now plays in one of the best teams in the world. Even doctors, who are professional and know everything about injury because they have experience, can be wrong.

“That was a real example for me and I am so lucky because Fernandinho can speak Russian and he helped a lot as my English is not so good.”

If Zinchenko’s emergence this season has gone under the radar due to City’s stellar season he is a prime illustration of Guardiola’s penchant for re-modelling midfielders as defenders. Fabian Delph, whom Zinchenko is likely to replace at Wembley due to suspension, was also moved to left-back from a career-long central berth.

Zinchenko says: “In Russia sometimes I played in this position; it is not something new for me. I try to absorb every single bit of advice from Guardiola. For example, when I am on the bench and after half-time it is very interesting [to see]how he is finding the right words at the right time.”

Zinchenko, who was born in Radomyshi, spent six years at Shakhtar before war in the region forced him to leave in 2014. He joined the Russian club, Ufa, though only after a period of limbo.

“Before Ufa I was without a team for five or six months. It was a difficult situation because at that moment I had a contract with Shakhtar Donetsk but it was very dangerous in Ukraine. That’s why my parents moved. I just trained every day by myself on the streets of Moscow. Then my manager found me Rubin Kazan. So I went for pre-season with them in Italy. Everything was good and after pre-season I was in Kazan and they told me I had to wait a little bit and then we can sign a contract.

“At that moment I still had one and a half years on my contract at Shakhtar. I was there for four months without anything, just training because I could not play. I got tired of this situation and told them I cannot listen to the same words from you every day.

“So I moved and a few days later Ufa called my manager and gave me a contract straight away. I signed the contract and went for pre-season with them. To be honest, I was very happy in that moment because I had not played for one and a half years. In Shakhtar the situation was very difficult for me. I had two years left on my contract and they told me I had to continue with them.

“My dream was to play in the first team. But you can imagine how difficult that was then because their team was Fernandinho, Douglas Costa, [Henrikh]Mkhitaryan. For the Ukrainian guys it was very difficult to break into the team.”

Zinchenko signed for City in the summer of 2016 and had loan spells at PSV Eindhoven and their reserve side, Jong PSV. As with the move from Ukraine to Russia, experiencing the Netherlands quickened maturity, with the country’s particular sauna culture broadening horizons.

“The travel has helped. Last year was the most difficult adaptation because Ukrainians and Russians have a different mentality to European guys,” says Zinchenko. “In Holland everyone can have a sauna together – both women and men – and everyone is naked. For us it’s very strange. In Ukraine and Russia it’s not possible. It’s strange when you see the son, maybe seven, his mum, his grandmother, grandfather – all together naked. It’s about mentality – that’s what I mean, I’m learning every day.”

Since his debut in the penalty shoot-out Carabao Cup win against Wolverhampton Wanderers in late October Zinchenko has made eight appearances for City. Be part of a winning side in his 10th on Sunday and he may stop being mistaken for a more illustrious team-mate.

“Kevin De Bruyne – I’ve heard it all the time, trust me,” Zinchenko says. “Everyone calls me ‘Kev’. When I’m getting the bus, the fans are shouting, ‘Kev, can I have a picture?’ Then I turn and they’re like ‘Oh, it’s not Kevin.’ From afar maybe we look like twins but, when we are together, I don’t think so. I am more beautiful than him, definitely.” - Guardian services