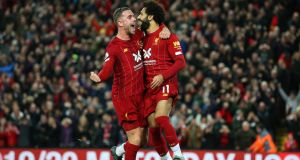 There can be little doubt that Liverpool and Tottenham have gone in opposite directions since they met in the Champions League final last June. Liverpool won on that strangely underwhelming occasion in Madrid and they have since pressed harder, taking a stranglehold on the Premier League. Spurs, by contrast, have endured all manner of set-backs – both on the field and off it.

On a pulsating Anfield occasion, Liverpool emphasised the gap in quality, playing with a breathless front-foot intensity and, for long spells, threatening to tear Spurs apart. The chances they created were plentiful and clearcut, and it was all that Mauricio Pochettino’s players could do to cling on. Yet cling on they did – throughout a first half that they led through Harry Kane’s 47th-second goal and until the 75th minute when Liverpool’s only reward for their dominance had been Jordan Henderson’s 52nd-minute equaliser.

It could not last and it did not. To Spurs, a draw to follow those from earlier in the season at Manchester City and Arsenal would have been scarcely believable and, inevitably, they lost their fragile grip on it.

What stuck in their throats was how they conceded the winner. Serge Aurier tangled with Sadio Mané inside the Spurs area, winning possession, but he must have been the only person inside the stadium not to feel the Liverpool forward reaching in to nick the ball back. When Aurier swung a boot to clear, he connected only with Mané. Mohamed Salah did the rest from the penalty spot.

The crazy thing was that Spurs could have pinched an 89th-minute equaliser when Danny Rose jinked into space and fired high when gloriously placed. Pochettino’s team did fight until the last, having further sniffs through Son Heung-min and Kane, but anything other than a home win would have been an injustice.

This was Liverpool’s third win of the season over a rival from the so-called big six and they have also got the visit to Manchester United out of the way – the only fixture in which they have dropped points so far. Their next home game comes against Manchester City on Sunday week and the only blot here was an injury that forced off Salah before the end.

Pochettino had been desperate to use the 5-0 Champions League drubbing of Red Star last Tuesday as a touchstone, something to mark the end of Spurs’ recent struggles, and he felt his hopes surge immediately when his team went ahead. The move owed much to a burst of driving acceleration from Moussa Sissoko, which carried him away from two red shirts in the centre of the field and prefaced a pass out left to Son.

The South Korean advanced, then jinked inside and tried his luck, which was in because the shot deflected heavily off Dejan Lovren, wrong-footing Alisson, and came back off the upright. Kane was lurking, showing more sharpness than the defenders around him, and he was able to adjust his feet in a heartbeat and guide a stooping header into the unguarded net.

Sissoko had conceded the penalty that turned the Champions League final in Liverpool’s favour inside the opening minute while he also had nightmarish memories of his previous visit to Anfield last season when, confronted by Virgil Van Dijk late on, he failed to exploit a two-on-one Spurs break. This was more like it from him.

Liverpool had seen Manchester City win on Saturday, cutting the lead at the top of the table to three points, and they needed to respond to them. Now they needed to respond to Spurs, too. The visitors might have gone 2-0 up on 24 minutes and, when first Dele Alli and then Kane could not stretch to apply a decisive touch in front of goal, the thought flickered that it could be a turning point.

Pochettino had set up in 4-3-2-1 formation, which looked more like 4-5-1 for most of the time, with Alli on the left of the central midfield trio and, after the early goal, the lines were drawn for battle. Liverpool dominated possession, they came to camp inside the Spurs half, raising the tempo and creating a fistful of openings from around the 20 minute mark – when Salah worked Paulo Gazzaniga – and it was a minor miracle that Spurs got to half-time in front.

There were a series of standout first-half chances for Liverpool, with Gazzaniga distinguishing himself to keep out the first three. His double save to thwart first Salah and then Roberto Firmino drew the breath – and howls of frustration from the home support – while his tip-over from Van Dijk’s close-range header was another special moment.

The Argentinian did well to push away a Trent Alexander-Arnold pile-driver before Mané fluffed a header when gloriously placed. Henderson misread a header on 45 minutes and Spurs, who had Rose booked for a scything challenge on the Liverpool captain, could gulp in the oxygen during the interval.

Pochettino’s team had to get a foothold higher up the pitch in the second half because it felt unlikely that their rearguard action could endure for another 45 minutes. It was easier said than done in the face of Liverpool’s relentlessness but they did create a glorious chance in the 48th minute, when Gazzaniga’s drop-kick sent Son clear of Lovren. Son went around Alisson and, from a tight angle, could only thud a shot against the crossbar.

Liverpool made the most of the reprieve, although it was impossible to say that they did not deserve to restore parity. Gazzaniga had already kept out a Firmino header and he was beaten when Rose could not deal with a Fabinho chip and Henderson bludgeoned low into the far corner.

Liverpool circulated the ball with tremendous zip, their movement was beautifully joined-up and, time and again, the full backs, Alexander-Arnold and Andy Robertson, got into advanced crossing positions. There were chances for Firmino and Gini Wijnaldum before Mané went down and Salah scored from the spot. Spurs’ late push was not enough. – Guardian