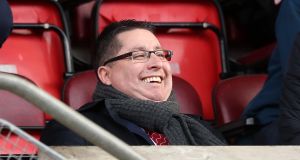 Cliftonville chairman Gerard Lawlor suggested the all-island league proposal was a ‘pipe dream’ and ‘unrealistic at this moment in time’. Photograph: Declan Roughan/Inpho

Harry Cavan, the IFA’s long-serving president, once observed that having two national teams on the island of Ireland was “nonsensical” then famously changed his tune when his one started to qualify for World Cups.

He was prominently involved through the mid- and late 1970s when the associations actively explored the notion of fielding just one national side. They looked at the prospect of having one league too but they quickly concluded that a major sponsor would be required. More than 40 years on that much, at least, does not appear to have changed.

Given the scale of the violence at the time, somebody would have been well within their rights to suggest the whole thing was a “pipe dream,” or “unrealistic at this moment in time”. Those actual quotes, though, are from Cliftonville chairman Gerard Lawlor this week in an interview carried on the website BelfastLive and refer to Kieran Lucid’s proposal to establish an all-island league now; something clubs from North and South are to discuss on Thursday at a meeting in Dundalk.

Lawlor, who is also vice-chair of the Northern Irish Football League (NIFL) is one of the few really senior club officials from north or south of the Border to really come out against the idea. As such, he might have made a useful contribution to the debate by pointing out some flaws in the plan.

Instead, his tone was needlessly antagonistic and his comments included the suggestion that if any clubs down here want to play a bit of cross-Border ball they should consider joining the NIFL where the prize for winning the title is less than half the €110,000 the Airtricity League champions get, a figure widely regarded as insulting by fans here.

The reality is that nobody should be happy with the state of the senior club game in either jurisdiction and Lucid’s plan, which includes a proposal that the winners of a new all-island league get €800,000, seems more like a no-brainer if he can actually deliver on revenue projections of between €6 million and €10 million per annum, which he continues to insist he can.

The only concrete downside pointed to is the loss of European spots but that should not in any way be seen as a fait accompli at a time when Uefa is attempting to buy off smaller leagues in order to give itself space to make ever more concessions to the continent’s biggest clubs. The move should be sold as an experiment, one for Europe to look at and learn from. Uefa should actually be asked to underwrite it for a trial period, say five years, and the hope should be that all of the club competition places be kept. It is certainly hard to imagine it being a sticking point with regard to the new third-tier competition. Even if all four were taken, though, the extra prize money envisaged would more than make up for the shortfall.

Lawlor’s suggestion that Lucid’s plan lacks “meat on the bones” can presumably be taken to mean he does not believe that the Kerry man can deliver on his projections but even if he fell some way short, the numbers are off the scale in terms of what either league has been managing by itself.

His very first TV rights offer was a “seven-figure sum” and assuming that that’s €1 million rather than €9.9 million, it is probably twice the combined figure being generated at present. The data and sponsorship figures should be substantially up too. And to date, Lucid has been operating against a background of complete uncertainty because nobody can say for sure if the league he is trying to sell is actually going to ever happen.

In reality, though, his plan represents an opportunity for change on a scale that simply cannot be achieved in the foreseeable future by the leagues individually. As things stand, more than 100,000 people from the Republic alone head to Britain each year to watch a Premier League game and spend about €120 million doing it.

In time, an all-island league can provide the basis on which a more attractive alternative can be offered back at home, a structure that allows clubs to develop better players, to have them play at a higher level and build decent facilities for people to watch them doing it.

Lawlor is entitled to be sceptical but other big Belfast clubs such as Linfield and Glentoran are clearly more interested and people such as Mike Treacy and Garrett Kelleher, of Dundalk and St Patrick’s Athletic are among the strong supporters.

Even they might feel that Lucid’s target of a 2021 start is looking a little ambitious at this stage but if the clubs don’t start to show enough commitment to allow the idea be substantially moved on, we might well be looking back again in a couple of decades and wondering just why it didn’t happen. And this time, the answers will a little less obvious.