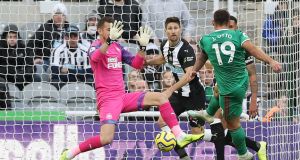 Nuno Espirito Santo is not a man to camouflage his emotions and the Wolves manager appeared to be experiencing pretty much the full range in the away technical area at St James’ Park.

The good news for Nuno’s players was that extreme irritation at their slow start was replaced with the evident satisfaction of seeing his clever second-half formational switch round preface an equaliser as Newcastle were ultimately left clinging on for a point.

By the final whistle Steve Bruce looked by far the more miserable manager and could certainly have done without seeing Sean Longstaff sent off for an awful tackle on Ruben Neves.

Wolves returned from Slovakia and their Europa League win at Slovan Bratislava in the early hours of Friday morning and the resultant fatigue perhaps contributed to a decidedly low-adrenaline opening.

Newcastle had no such excuse but they, too, began in ponderous, slightly tentative, deep-defending mode. Had the players been remotely controlled toys it would have seemed that their batteries were running awfully low.

With 30 minutes on the clock the principal talking point was whether Federico Fernandez had intentionally body-checked Diogo Jota. It was probably an accident but Jota required prolonged touchline treatment.

Not for the first time the Longstaff brothers, Sean and Matty, did their best to raise the Tyneside tone in Bruce’s central midfield. Sure enough, Matty’s fine long, lofted pass was weighted perfectly for Miguel Almiron to run on to before accelerating beyond Romain Saiss. It seemed the hardest part was complete, leaving the Paraguay forward with only Rui Patricio to beat but the goalkeeper narrowed the angle, Almiron shot into the side netting and, still waiting for his first goal in a Newcastle shirt, was left looking a study in lonely dejection as he briefly stood, head bowed, by a pitch-side advertising hoarding.

It was a bad miss of the sort that can alter the entire course of a game but, much to Nuno’s chagrin, Newcastle were gifted a second chance when Jota forfeited possession and Fernandez’s superb cross prefaced Jamaal Lascelles out-leaping all-comers before powering a scoring header beyond Patricio.

If the home side’s sixth goal of an alarmingly low-scoring league campaign enabled Bruce’s players to climb above Watford at the bottom of the Premier League’s scoring charts, it also re-emphasised the visitor’s defensive vulnerability both in the air and to crosses.

Wolves tend to be much better at skimming grass-high passes around the pitch but even in this sphere they were malfunctioning. Nuno certainly cannot have been delighted by Newcastle’s success in repeatedly crowding out Jota, while Neves and Joao Moutinho were being permitted similarly limited room for manoeuvre.

At half-time Nuno emerged well before his players and sat on his bench in what seemed quietly furious contemplation. His cause was not helped by Allan Saint-Maximin’s increasing success in using his formidable pace to frequently bewilder the Wolves defence.

The visitors needed Adama Traore to run at Bruce’s backline in similar fashion but this did not really happen until a smart, if subtle, second-half formational rejig on Nuno’s part began to really take effect.

With Willy Boly having sustained a serious ankle injury in training, Wolves had kicked off in 3-5-2 formation featuring Leander Dendoncker in midfield but once Nuno switched the latter back into the back three of a new look 3-4-3 system, his team – and Traore in particular – improved, with the latter finally starting to get the better of Jetro Willems.

Matt Doherty had started in defence but was revelling in his relocation to right wing back where his partnership with Traore was starting to reap rich dividends. When that pair exchanged passes, the Ireland international made the very best of Traore’s lovely reverse ball before unleashing a cross which Martin Dubravka inexplicably made a hash of. The goalkeeper – who only penned a lucrative new six-year contract last week – watched in horror as the ball fell for Jonathan Castro Otto to fire home from eight yards.

It was to get worse for Newcastle when Sean Longstaff was shown a straight red card for a horribly high and out-of-control challenge on Neves. The young midfielder’s immediate apology suggested he might not have meant it but it looked awful and there were no protests from anyone in black and white as Longstaff trudged off looking suitably disgusted with himself.