Celtic thrash Aberdeen to cap off a dream week 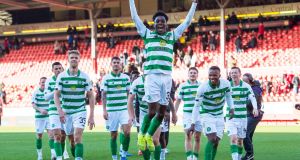 Celtic rounded off a magnificent week with a 4-0 dismantling of Aberdeen in the Ladbrokes Premiership.

The Hoops’ dramatic 2-1 Europa League win over Lazio on Thursday night followed a 6-0 thrashing of Ross County last weekend and Neil Lennon’s side powered to another impressive victory at Pittodrie.

French forward Odsonne Edouard struck in the 10th minute before 18-year-old Dutch right-back Jeremie Frimpong doubled that lead five minutes later with his first Hoops goal in his first away match since signing from Manchester City in September.

Derek McInnes’ side offered little resistance and further first-half strikes from attackers James Forrest and Mohamed Elyounoussi left Aberdeen in tatters and their supporters far from happy, with Celtic cruising the second half.

Lennon had hinted that he would be loath to make many changes to his side but midfielder Ryan Christie dropped out to serve the second game of a two-match ban to be replaced by Tom Rogic while Frimpong came in ahead of Hatem Elhamed, who started from the bench.

Connor McLennan replaced James Wilson for the Dons but any confidence taken from the fine 3-0 win over Motherwell last week soon evaporated.

The champions started the game ahead of Rangers at the top of the table by one more goal scored and quickly added to their tally.

Edouard played a one-two with Forrest on the right and glided into the Dons penalty area unchallenged by centre-backs Michael Devlin and Scott McKenna and rifled the ball from 16 yards low past goalkeeper Joe Lewis.

The home side were undone by more poor defending in the 15th minute when Frimpong raced into the box to look for a return Edouard pass and when the ball broke loose after McKenna and right-back Shay Logan got tangled up with Lewis, he had the easiest of tasks knocking the ball over the line.

The visitors dominated possession thereafter, putting the dispirited Dons to the sword.

Forrest all but walked in number three in the 36th minute. Elyounoussi set him up after taking a pass from Rogic, who crossed for the Norway international to fend off Devlin and knock in a fourth from 12 yards seconds before the interval.

Unsurprisingly, McInnes made changes at the break with Craig Bryson on for McLennan and Wilson replacing Niall McGinn, while Nir Bitton took over from Hoops defender Christopher Jullien.

Celtic stepped off the gas but picked their moments to attack.

In the 65th minute, after Logan had fouled Edouard 25 yards from goal, Lewis tipped the Frenchman’s free-kick around a post for a corner.

Edouard was soon replaced by Vakoun Issouf Bayo before Frimpong fired over on the angle after being set up by Forrest, but the game continued to fade out to another imposing win for Celtic.