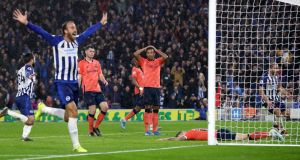 Everton’s Mason Holgate reacts as Lucas Digne scores an own goal during the Premier League loss to Brighton at the AMEX Stadium. Photo: Gareth Fuller/PA Wire

Digne slid home a cross from substitute Leandro Trossard in the fourth minute of added time after Albion striker Neal Maupay equalised in contentious fashion with the first Premier League penalty awarded with the use of VAR.

Substitute Dominic Calvert-Lewin looked to have earned the Toffees a first away win since March after Adam Webster’s own goal cancelled out Pascal Gross’ free-kick opener.

But the visitors were denied in sensational style as the Seagulls recorded successive home wins with two late strikes which pile pressure back on Everton boss Marco Silva.

Referee Andrew Madley pointed to the spot in the 80th minute following a lengthy consultation with Stockley Park.

Replays showed Toffees defender Michael Keane stood on the foot of Seagulls striker Aaron Connolly inside the box, although far stronger claims for spot-kicks have been waved away in the top flight this season.

Silva was furious with the decision and, after Maupay took full advantage from 12 yards, a miserable afternoon for the Portuguese was compounded by another late twist in rain-soaked Sussex.

Everton had temporarily quelled growing criticism of their manager with a deserved win over West Ham last weekend.

The Toffees were seeking to build on that success with an overdue victory on the road but, despite a positive start, soon fell behind.

England goalkeeper Jordan Pickford was far from convincing as the ball thundered past him and would have been relieved to see the visitors level within five minutes.

Digne delivered an inviting, outswinging corner from the right, allowing the unmarked Richarlison to find space at the near post and glance a header against the unfortunate Webster and into the bottom left corner.

The away side were then dealt a blow when in-form winger Bernard limped off after slipping on the wet surface and suffering what appeared to a nasty knee injury.

Silva was incensed Brighton did not stop play while the Brazilian lay stricken on the field, although he had plenty of reasons to be pleased with his dominant team’s attacking intent.

Theo Walcott, who earlier had an effort smothered by Mat Ryan following a poor touch, saw a goal-bound effort blocked by Lewis Dunk, before the Brighton goalkeeper clawed Alex Iwobi’s deflected effort off the line.

Gross had the ball in the net for a second time in the 65th minute but was ruled offside, a decision verified by a VAR check.

Everton had been beaten on their two previous visits to the Amex Stadium but looked like snapping that run when Calvert-Lewin made an almost immediate impact from the bench.

Just two minutes after replacing Iwobi, the England Under-21 striker latched on to a delightful Gomes through ball to slide it under the onrushing Ryan.

Any hope the visitors had of easing to victory were quickly scuppered after they were penalised in extremely contentious circumstances and Maupay stepped up to slam the ball down the middle and claim his fourth goal of the season.

Everton defender Mason Holgate, making his first top-flight start in 13 months, then escaped with only a booking after scything down Maupay.

The Merseyside club would undoubtedly have been frustrated with just a point and things took a turn for the worse deep into stoppage time when Trossard’s teasing ball across goal tempted Digne into a mistake which delighted the home crowd.

Lys Mousset’s second goal in as many games earned Sheffield United a 1-1 draw at West Ham United on Saturday, with the point sending the newly-promoted side seventh in the Premier League.

Somewhat against the run of play, Robert Snodgrass slid the ball into the net after being picked out by Andriy Yarmalenko on the stroke of halftime to give the hosts the lead.

October has become something of a difficult month for West Ham in recent years, with the Hammers having not tasted victory in their last nine October Premier League matches prior to Saturday’s encounter at London Stadium.

That pressure seemed to get to West Ham as the visitors had chance after chance to equalise before Mousset sneaked the ball home from a tight angle in the 69th minute.

West Ham had plenty of opportunities to win but they could not find a way past Sheffield United goalkeeper Dean Henderson.

Watford’s winless run since the start of the Premier League campaign stretched to 10 games when they played out a 0-0 draw against Bournemouth at Vicarage Road on Saturday but they had goalkeeper Ben Foster to thank for a rare clean sheet.

Watford were dealt an early blow when they were forced to substitute Tom Cleverley 10 minutes into the game after the midfielder injured his ankle while making a tackle, with Will Hughes coming on.

Foster kept Watford in the game with a string of saves as Bournemouth tested him with shots from distance. He was forced to dive low to his right twice to keep out Diego Rico’s stinging shot and a well-placed curler from Philip Billing.

The visitors’ best chance of the first half came on the stroke of halftime when a quick counter-attack released Callum Wilson on the right and his cross to the far post was met by Arnaut Groeneveld, whose effort was kept out by a diving Foster.

It was Bournemouth keeper Aaron Ramsdale’s turn to provide the highlights in the second half, first denying Gerard Deulofeu at his near post and then flying low to his left to palm away a low drive from Hughes in the 75th minute.

The result leaves Quique Sanchez Flores’s Watford bottom of the standings with five points while Bournemouth, who were held to a second consecutive 0-0 draw, are eighth with 13 points.

1 Sonia O’Sullivan: Taming The Tan gave us one last roll of the dice before shutdown
2 Avoid the treadmill at all costs – marathon training in the 2km radius
3 Ireland’s underage rugby stars miss out on chances to shine at Easter
4 America at Large: On Long Island, longing for a return to our field of dreams
5 Premier League stress to PFA that players need to take pay cuts
Real news has value SUBSCRIBE