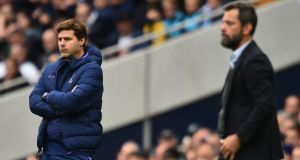 Alli’s 86th-minute equaliser was initially given as no goal on the big screen, only for it to transpire that the wrong message had been relayed and the goal had in fact been given.

Mauricio Pochettino’s beleaguered side looked to be heading for another shocking defeat with the Hornets holding firm after Abdoulaye Doucoure’s sixth-minute opener. In further VAR issues, Gerard Deulofeu looked unfortunate to be denied a first-half penalty, then the same player missed a glorious chance to extend his side’s lead when clean through on Paulo Gazzaniga.

Frank Lampard’s Chelsea made it five wins in a row but only after being tested to the limit in a 1-0 win over Newcastle at Stamford Bridge. Tammy Abraham rattled the top of the Newcastle crossbar early in the second half then Chrisian Pulisic saw his effort superbly saved by Martin Dubravka as home frustration mounted.

Leicester came from behind to beat Burnley 2-1 in another match marred by issues over a VAR decision. Clarets boss Sean Dyche looked furious when a late Jonny Evans own goal was ruled out due to a foul in the build-up.

Chris Wood’s 26th-minute header had put the visitors ahead, against the run of play, but Jamie Vardy headed Leicester level on the stroke of half-time. Youri Tielemans fired what proved to be the winner in the 74th minute on an emotional day for the club as they honoured late chairman Vichai Srivaddhanaprabha on the eve of the one-year anniversary of his tragic death.

Aston Villa’s persistence paid off as they also fought back from behind to beat 10-man Brighton at Villa Park. Adam Webster struck Brighton in front in the 21st minute and despite having Aaron Mooy sent off for a second bookable offence just past the half-hour, the Seagulls held firm. Conor Hourihane had an effort ruled out for an earlier foul before Jack Grealish levelled on the stroke of half-time when he converted a cross from Frederic Guilbert.

And Brighton’s battling proved in vain as Villa full-back Matt Targett grabbed the three points in stoppage time when he hit a left-foot shot from a tight angle.

A second-half penalty from Raul Jimenez rescued a point for Wolves against Southampton at Molineux. Jimenez had a first-half effort ruled out by VAR before Danny Ings puts Saints in front in the 53rd minute.

But Molineux was relieved when Matt Doherty was fouled in the box and Jimenez stepped up to grab a point for the home side just past the hour mark. Bournemouth and Norwich were forced to settle for a point apiece after an eminently forgettable goalless draw at the Vitality Stadium.