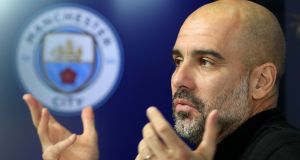 Pep Guardiola has said “racism is everywhere” and has to be fought each day. Manchester City’s manager was speaking after the alleged racist abuse of Raheem Sterling at Chelsea.

Sterling was abused by Chelsea fans on Saturday and the incident is being investigated by the London club and the Metropolitan Police. Four Chelsea supporters have been suspended by the club. One fan pictured abusing Sterling has reportedly denied any racial element.

On Sunday Sterling highlighted on Instagram the differing newspaper coverage of Phil Foden and Tosin Adarabioyo with regard to them buying houses for family members.

Guardiola, asked whether Sterling suffers abuse because he is black, said: “Really I don’t know. I spoke with him when I arrived and he was active on social media and Instagram and I told him to protect his private life, and he did it. He’s less active than when he was young, more mature, on and off the pitch – he has two kids. I don’t know the reason why. Hopefully the criticism [only] is when he plays shit, he plays bad.

“But just for the colour of his skin – believe me that’s ridiculous and that’s why everyone – we have to protect from that situation.

“The media, of course [has a responsibility] – everyone and everywhere has. You can write something and offend, create a conflict. Today the real power is the media, not politicians, not the governments, it’s the media. That’s why you have the possibility.”

Guardiola’s view is that racism is widespread. “Racism is everywhere; people focus on football but it’s not just in football. How we treat immigrants and refugees, when once in our lives our grandfathers were refugees. How we treat them in society – it’s everywhere. That’s why we have to fight every day.

“I appreciate what Chelsea did. If it happened in my club we should do the same. We have to fight for human rights to make a better society for the future. Today it’s dangerous not just in England, all across Europe. The message for the politicians is for them to be tough on human rights and we have to defend democracy in the best way.”

Guardiola praised Sterling. “He’s an incredible person,” he said. “It’s tough to understand today what happened to black people in all history. You have to protect them, how equal we are, all together. It’s tough in the 21st century to still be in this position. To have problems with diversity.

“We have to be better, everyone. Sport is amazing because you live through different people. My kids go to school, with English, black people, from everywhere. Today this happens but we have to defend and protect.”

On Wednesday City play Hoffenheim in their final Champions League group game in the midst of an injury crisis. Guardiola said David Silva would be out a for a “few weeks” and that Fernandinho was also injured, along with the squad player Danilo. Sergio Agüero, Kevin De Bruyne and Benjamin Mendy remain out and the manager said this had left him with 15 fit players. “Sergio maybe back at the weekend,” he added.

Leroy Sane has indicated he could soon sign fresh terms. “I feel really at home here from day one and of course it is possible,” the forward said. “From the beginning since I arrived here, I am really happy.” – Guardian