Eden Hazard pulls the strings as Chelsea see off Brighton 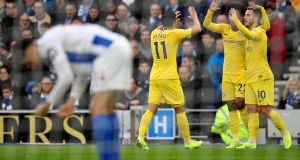 Eden Hazard departed this contest with a grimace eight minutes from time, his right ankle still smarting from the damage inflicted moments earlier by Dale Stephens’ unpunished challenge. The Belgian has grown used to taping on the ice packs in the dug-out, and would rip it free again once the final whistle had sounded, but at least he could be warmed by the wounds he had inflicted on the opposition.

This had been one of his more mesmeric displays, the kind where markers seem hypnotised by his skill on the ball and quail at his every involvement. He had provided his customary assist to ease Chelsea ahead, and would end a 12-game goal drought before the break, albeit courtesy of Brighton & Hove Albion’s generosity. Leon Balogun, in for the suspended Shane Duffy, passed the ball straight to Willian who easily slipped Hazard through into the vacant home half. The forward’s finish was dispatched crisply inside Mat Ryan’s post with the goalkeeper instinctively expecting the shot to arrow towards the other corner.

That, combined with Hazard’s utterly irresistible display, had felt the prelude to another saunter on the south coast for this team, and it was to Brighton’s credit that they would rally late on to make life distinctly uncomfortable for their visitors in the closing stages. In the end, Albion ran out of time and slipped to a rare home defeat, their sense of regret stemming from their own inadequacy over the first hour.

Chelsea’s dominance had been established from the moment the visitors sized up that Brighton were uncharacteristically tentative in their approach and sloppy in their possession. It was as if the hosts were still scarred from the drubbing they endured here to these opponents last term, for ever braced to be sliced open by that fluid front three. The combination play was perhaps not quite up to the majesty of that trouncing back in January, but it came close. The visitors’ opening goal summed it up: a prolonged period of fizzed passing deep in Albion territory culminating in Hazard’s burst into the box.

If the Belgian benefited from the ball breaking back to him from the clutter of defenders trying to close him down, then his wriggle away from Martín Montoya and sublimely weighted diagonal pass for the unmarked Pedro to tap in at the far post smacked of class. Maurizio Sarri had tripped over a rack of energy drinks loitering in his technical area in the build-up to that goal, his gaze fixed upon Chelsea’s snapped movement of the ball. By the time he had recovered his dignity, his team were ahead.

For over an hour, Brighton had no answer. A physically imposing team who had lost only once in 10 top-flight home games seemed to shrink in this company, diminished by the speed and incision of their opponents’ passing. The ball was surrendered so wastefully – as Balogun demonstrated at the second goal – and Glenn Murray too often frustrated by an assistant’s flag for offside, to leave Chris Hughton hopping in his exasperation on the sidelines. There were periods in the first half when, as they sensed the contest had already veered away from them, they stood off Chelsea to such a degree that David Luiz, picking the ball up deep in his own half, was able to stop the ball, survey his options and even smooth his hair back behind his ears without a challenge in sight.

Marcos Alonso, on his 100th start of the club, would thump a shot from distance which cannoned back from the inside of the far post. Yet, as Wolverhampton Wanderers proved earlier this month, Chelsea are a team who can be dislodged from a position of apparently complete authority. Florin Andone duly injected some urgency into their approach, unsettling centre-halves with sheer aggression and pace. The striker had been loitering with intent in the six-yard box as Pascal Gross centred after Davy Propper’s fine cross-field pass. Bernardo’s nod down bounced up and over Andone, but Solly March swivelled and converted a first league goal in 15 months to half the deficit.

There were pangs of anxiety thereafter, most notably when Alonso, defensively rather frail throughout, tugged back March as he threatened to sprint on to the substitute Yves Bissouma’s pass three minutes from time. Hughton and the home support bellowed for more serious sanction than the yellow card flashed by Stuart Attwell. Doubts over whether the winger would have reached the through-ball had presumably determined his decision, but at least Albion had roused themselves. The closing stages were theirs. Their frustration was that it had taken so long to panic Chelsea into retreat.

1 Gerry Thornley: Wild reactions to this Ireland team as fickle as the wind
2 Five Golf Classics for you to tee up at in 2020
3 Crunch time for Connacht as they chase Pro14 dream to South Africa
4 Munster were fever-tested when they arrived in Italy
5 IRFU not consulted prior to Minister Harris’ recommendation to cancel Ireland v Italy
Real news has value SUBSCRIBE