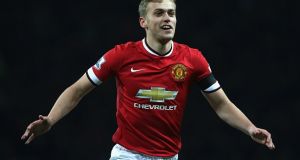 James Wilson is on his fourth loan from Manchester United. Photograph: Getty Images

Reserve team football in England may start to look very different when Fifa introduce their new rules on loans. For the past few years, rather than having their true second squad play in Premier League 2, the richest clubs have sent youngsters on loan all over Europe. Those left to play in the Under-23s tend to be the Under-19 or 20s. The most extreme example is Chelsea, who not only have a dozen or so first-team squad members rarely playing for Maurizio Sarri, but also another 39 professionals out on loan and that is before you get to their Premier League 2 team, which you could argue is Chelsea’s sixth XI.

If Fifa’s proposals go through, clubs may only be allowed to loan out six to eight pros from 2020-21 – although clubs are hoping that deals with domestic clubs and those involving young, homegrown players will not be affected by the new rules. Depending on the severity of the policy, it could have serious repercussions not only at Chelsea but also Manchester City, Wolves and others. Pep Guardiola says City will adapt accordingly. “We will have to bring the players back here and see where they are going to play and, if we can’t find anywhere, we will have to sell them.”

The current system means players can go on loan for season after season. Michael Hector had 11 loans from Reading, and is on his fourth since signing for Chelsea in 2015. James Wilson is on his fourth from Manchester United, and keeper Sam Johnstone went on 10 loans to eight clubs in seven years before signing for West Brom last summer.

Despite having the finances to lure any of the world’s best young players to Manchester, City still have a core of local players in their Elite Development Squad. When I saw them a few weeks ago in a Premier League 2 game, they fielded nine products of English football. The majority of that squad is English-born – including centre-back Colin Rosler, son of Uwe, who plays for Norway Under-21s – complemented by seven continental Europeans and one Argentinian. Brexit may change that.

Ian Carlo Poveda, an 18-year-old midfielder from Brentford, has a frame and footwork reminiscent of David Silva. Welsh flier Rabbi Matondo, also 18, must be one of the fastest footballers in the country – a stocky Ryan Giggs in fast forward whose talent demands that City move the ball out wide rapidly and repeatedly. Matondo varies his runs, cutting in or going round the back, firing low crosses into the danger zone. City’s youngsters mirror the speed, agility and inventiveness of the first team, fuelled by a rabidly relentless full-court press, and reassuringly undermined by the naivety of youth that comes with even the best academy football.

Whether Poveda, Matondo or any others can follow local lad Phil Foden into Pep Guardiola’s squad remains to be seen. At least the boss knows them: he tries to take their training at least once a week.

City have put their potential future in the hands of a refreshingly low-profile coach: former Port Vale midfielder Paul Harsley. Now 40, Harsley has come from a different football world to his young players, some of whom already bank five-figure weekly wages. After an apprenticeship at Grimsby, Harsley spent the vast majority of his career in the bottom two divisions, primarily with Scunthorpe and Macclesfield, before ending at non-league North Ferriby.

He made the leap into coaching youth teams at Scunthorpe and Birmingham City, then took the Under-23s at Barnsley before getting the City job last summer. Harsley was back at Oakwell last week as his new side (featuring squad numbers 82, 83, 84, 85, 87, 89 and 91!) scraped past Barnsley via penalties in the Checkatrade Trophy.

Calm and collected on the touchline, Harsley sends out logical, simple instructions. He and his staff are entrusted with ensuring these teenagers become professional footballers at the highest level their talent allows. If that is in one of Europe’s top tier leagues or the Championship, City should collect seven-figure sums when they move on.

Even before giant clubs saw selling young players as a method of complying with Financial Fair Play, Alex Ferguson declared that any youngster who left Manchester United would do so at market value, raising millions for his first-team budget when talented reserves hit the glass ceiling in the dressing room. It’s just good business.

City and Chelsea are extreme examples, having used their outstanding academies to produce high-quality footballers not for themselves but for other, less loaded, clubs. The current loan system allows them to keep this talent for years even if the players have no chance of a first-team breakthrough. Fifa’s new regulations are meant to stop this, with loans being used “for the purpose of youth development as opposed to commercial exploitation.” As Guardiola says, the biggest clubs could soon be putting a lot of young players on the market.

1 Betting shops face uncertain future as they prepare for Monday reopening
2 How a GAA club sprang up in east Belfast over Sunday breakfast
3 Bernard Jackman helping world’s top coaches pick each other’s brains
4 Liverpool could seal title win at Anfield when they host Crystal Palace
5 GAA club matches to return on July 31st with intercounty games in October
Real news has value SUBSCRIBE
Crossword Get access to over 6,000 interactive crosswords