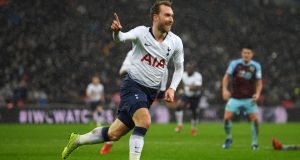 Burnley were agonisingly close to holding Tottenham to a draw at Wembley but Christian Eriksen netted in injury time to earn a 1-0 victory for Mauricio Pochettino’s side and keep them within five points of Manchester City.

Watford ended a six-game winless run in the Premier League with a 3-2 success against Cardiff, although they were made to sweat.

Gerard Deulofeu scored a fine individual goal in the 16th minute and then set up Jose Holebas for an unstoppable second seven minutes after the break.

Teenager Domingos Quina looked to have put the icing on the cake with his first league goal 22 minutes from time but Junior Hoilett curled in a superb goal for Cardiff and the Welsh side took another step towards an unlikely comeback when Bobby Reid grabbed a second with eight minutes left.

However, Neil Warnock’s side were unable to find an equaliser.

At the bottom of the table there were important 1-0 victories for Crystal Palace – despite the absence of Wilfried Zaha – and Newcastle.

Luke Milivojevic powered in a 39th-minute goal for Palace against Leicester while Salomon Rondon’s 55th-minute effort earned Newcastle victory at Huddersfield, who remain in the bottom three.

Bournemouth’s miserable run continued as they were beaten 2-0 by Wolves. Raul Jimenez scored the opener in the 12th minute and Ivan Cavaleiro made the points safe in injury time, earning a third straight victory for Wolves.

In the late match, West Ham made it four wins in a row with a 2-0 success against bottom side Fulham. Both goals came in the first half an hour, with Robert Snodgrass’s opener followed by a close-range finish from Michail Antonio.

1 ‘Manchester United are lucky to have you’: Klopp responds to Donegal schoolboy’s letter
2 Liam Toland: Larmour can distract England while others flourish
3 Solskjaer complains about Molten balls after Brugge draw
4 This month a decade ago, football and Dublin changed course
5 Cian Healy’s hunger for battle undiminished by the years
Real news has value SUBSCRIBE