Leeds up and running as they ease aside Bristol City 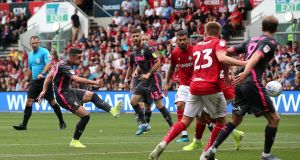 Leeds United have been to other side of the world and back since coming up short in May, to Sydney and Sardinia, but began the new season as though they had never been away. Perched on his blue bucket, Marcelo Bielsa witnessed his side, namely Pablo Hernández, thoroughly outclass a Bristol City team with ambitions of earning promotion themselves. Just as Leeds threatened to turn a convincing victory into a rout, Lee Johnson’s side rallied and Andreas Weimann pulled back a late goal ut it was insufficient, with the away supporters filing for the turnstiles singing, “we are top of the league”.

A touch of class and some passive Bristol City defending allowed the evergreen Hernández to send a piercing left-footed drive into the top corner before Patrick Bamford doubled the visitors’ lead, nodding in a deft Hernández cross before Jack Harrison put the gloss on a satisfying start to the new campaign. Bielsa’s side resumed normal service with the bit between their teeth and the kind of unlimited vim that is synonymous with this suffocating Leeds side. Kalvin Phillips and Adam Forshaw ran the midfield, ensuring the hosts were starved of possession and, in truth, Leeds wiped the floor with a mesmerised City side from more or less start to finish.

A lot has happened at Leeds during the close season – Kemar Roofe was absent here and is expected join Anderlecht this week, following Pontus Jansson and Bailey Peacock-Farrell out of the door as the club seek to comply with financial fair play regulations – but this was the kind of boisterous performance that breeds confidence. Bielsa handed a competitive debut to Ben White and the on-loan Brighton defender exuded class throughout. The Argentinian, who threw on summer recruit Hélder Costa late on, is down to bare bones but his band of trusty performers again prospered.

Forshaw and Phillips, a pounding presence in midfield, pulled the strings all afternoon and the former supplied Hernández for the opener; the Spaniard was untroubled by Tomas Kalas, a £8m arrival from Chelsea, and allowed to spin on the edge of the 18-yard box before dispatching a deadly finish beyond Dan Bentley, another summer signing, in the City goal. Liam Cooper, the Leeds captain, planted a kiss on Hernández’s forehead in delight.

Hernández was the best player on the park, humiliating Callum O’Dowda early in the first half by nutmegging him not once but twice and the former Valencia winger created Leeds’ second, though Phillips and Forshaw had hands in the move on halfway. Hernández skipped beyond a static O’Dowda and teed up Bamford, who glanced in at the near post. But Leeds were not finished and Harrison pounced to puncture any early-season optimism in these parts after Mateusz Klich’s initial effort was blocked. By the time City rallied 11 minutes before time, it was too late and Weimann’s deflected strike proved merely a consolation on a chastening afternoon. - Guaridan