Fulham, and Cardiff fluff their lines on opening day 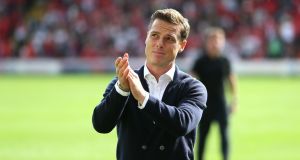 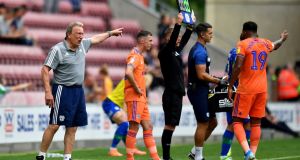 Promotion favourites Fulham suffered a blast of Championship reality with a shock opening-weekend 1-0 loss at Barnsley.

Former Derby midfielder Luke Thomas struck a debut goal for the hosts to stun Scott Parker’s Fulham, back in the Championship after a solitary Premier League campaign.

Fulham have retained the bulk of the squad that could not fend off top-flight relegation last term, but failed to gel on a frustrating afternoon at Oakwell.

Cardiff also suffered a bloody nose on their return to the second tier, as Wigan pulled off a fine 3-2 win at the DW Stadium.

Michael Jacobs and Josh Windass both scored in four second-half minutes to put Wigan 2-1 up, after Joe Ralls had handed Cardiff the early lead.

But just when the visitors started to think about chasing a winner, up popped Wales midfielder Lee Evans with a fine long-range effort to seal Wigan’s breathless victory.

After Harris had opened the scoring, Yakou Meite nodded Reading back on level terms after the break.

Irish international Keiren Westwood was sent off with 10 minutes to play, but Wednesday not only managed to hold out — replacement forward Lucas Joao fired in a third for the visitors.

Purrington grabbed the equaliser at Wembley en route to Charlton’s 2-1 League One play-off win over Sunderland in May, and was back on the scoresheet at the start of the new campaign.

Taylor’s close-range strike spared Dillon Phillips’ blushes, after the Charlton goalkeeper had put through his own net to gift Blackburn an equaliser.

Two goals in as many minutes turned the tide for Swansea to secure a 2-1 home win over Hull.

Kamil Grosicki had the visitors ahead after just three minutes, a lead they held until the break.

But right after the interval Swansea took control, with Spanish striker Borja Baston equalising from close range — and then Mike Van Der Hoorn nodding in Nathan Dyer’s cross for the winner.

Defender Kristian Pedersen headed home the only goal as Birmingham edged home 1-0 at Brentford, with full-back Steve Seddon laying on the crucial cross.

Jed Wallace fired Millwall to a 1-0 home win over Preston, with summer recruit Connor Mahoney teeing up the winner.

Jordan Hugill and Eberechi Eze both found the net as QPR saw off Stoke 2-1 at the Bet365 Stadium.

Sam Clucas clawed one back late on for Stoke, but the hosts could not conjure an equaliser.