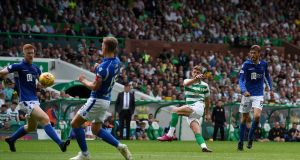 The Scotland international took his tally for the season to six goals in five matches with a brilliant performance as the champions ensured they topped the table on the opening day.

The only down side to Celtic’s day was a thigh injury for Hatem Abd Elhamed, whose debut lasted 50 minutes before he limped off for Anthony Ralston. The right-back will now be a major doubt for the first leg of Celtic’s third Champions League qualifier against Cluj on Wednesday.

After the game, Christie said: “Going into the game we wanted to make a statement so to start like that, we are obviously delighted. We need to make this place the fortress that it’s known for and to do that you need to dominate teams and win games with big margins. We moved the ball very well and it paid off.

“I loved playing a part in the European games but domestically I want to really kick on. I was happy enough last season managing to get in the starting line-up but now I really need to kick on. Being an attacking player, there is an expectation to provide goals by scoring and assisting, so my job is to do that.”