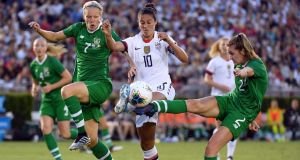 The USA women’s soccer team cruised to a 3-0 win over Ireland in Pasadena on Saturday in their first match on home soil since claiming back-to-back World Cup titles in France last month.

The team’s ‘Victory Tour’ got off to a winning start when Christen Press sent a high-arcing pass to Tobin Heath, whose header found the back of the net in the 16th minute.

Lindsey Horan doubled the advantage 15 minutes later and Carli Lloyd scored through a header from distance before the break to put the game out of Ireland’s reach.

The US are still riding high after defeating the Netherlands 2-0 last month to claim their fourth World Cup title and said their match at the Rose Bowl, where the team won their second world title 20 years ago, was special.

“This is such a historic place and it has such memories for the U.S. Women’s National Team,” said defender Becky Sauerbrunn.

“We’re just so thankful to get to celebrate with everyone who supported us in France.

“This is a great night.”

Ireland interim manager Tom O’Connor explained that while he never likes to lose a game, he was delighted with the determination shown by his side.

“It’s 3-0 and no one likes to lose, but I think you have to put it in context. We’re playing against the world champions in their home match, on their victory tour. Overall, I’m very, very pleased with the performance and the way the girls played tonight,” said O’Connor.

With the USA looking clinical in the first half, it was the way his team approached the second-half that really pleased O’Connor.

He said: “It was a tough first half, we didn’t see a lot of the ball. But the second half was a different story. After the first 45 minutes and with them three up already, we knew we had to get the shape right and overall I’m delighted with the second-half performance.”

And with the opening game of the European Championships against Montenegro on September 3rd just under one month away, the interim manager feels the future is bright for the young team.

He said: “To bring a 17-year-old, Eabha O’Mahony, on and for her to do so well was great. We had a few players making their debut or getting their first starts and they did very well, so that bodes well for the team for the future. Niamh Farrelly and Jess Gargan were excellent, they didn’t look out of sync at all. With all that in mind, we’ll look forward to the start of another campaign.”