US upstart The Athletic sends shockwaves through British football media

Backed by US venture capitalists, the website has been snapping up some big-name writers 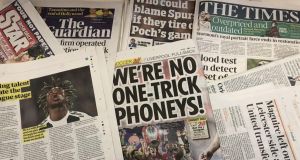 “We will wait every local paper out and let them continuously bleed until we are the last ones standing,” says Alex Mather, co-founder of The Atlantic

British football journalism has been jolted by the arrival of a US upstart which has signed up some of its highest profile reporters and is looking to disrupt the industry like Spotify and Netflix ruptured the music and broadcast industries.

The three-year challenger website and app, called The Athletic, has sent shockwaves through Fleet Street, tearing up the rule book by luring top journalists with blockbuster salaries, signing-on fees and equity stakes.

“This is the biggest thing to happen to the sports newspaper industry since the launch of Today, the UK’s first colour newspaper, 35 years ago,” said one national newspaper reporter.

“It is all anyone in the industry is talking about.”

The London Times sports desk has been plundered of key personnel while an award-winning Guardian journalist and correspondents from the BBC and the Daily Mail are among a slew of high-profile national and regional football writers who have been lured across to The Athletic.

The raid on the newspaper industry, which is backed by the riches of US venture capitalists, has led to a merry-go-round of job transfers and given sports editors a headache as journalists demand pay increases or threaten to quit for the upstart.

Critics are already questioning whether The Athletic’s subscription model will fly in the UK, saying it will be “very difficult”.

But should The Athletic prove a success, and move beyond football into other sports, it will be a fresh blow to a newspaper industry already suffering from an exodus of reader eyeballs.

The Athletic’s bold proposition is to dominate football coverage of Premier League football – and big clubs in lower leagues – by employing top beat writers for clubs like Liverpool, Manchester United, Chelsea and Leeds United as well a number of star big beast names.

It is betting that for an annual advertising-free subscription fee of around £60 a year of £10 a month (discounted prices are available until September), fans will sign up to its mix of scoops, interviews, boots-on-the-ground reporting, video and podcasts from their favourite reporters covering the most popular league in the world.

The Athletic’s CEO Alex Mather sold his plans to journalists in a swanky London hotel, where journalists were won over by enticing pay packages and the promise of millions in venture capital funding supporting the venture.

The UK operation is being headed up by two prize catches from Fleet Street: Ed Malyon and Alex Kay-Jelski, the sports editors of The Independent and The Times. Kay-Jelski will run editorial operations from its UK headquarters in London Bridge.

Top names like Sam Wallace, chief football writer for The Daily and Sunday Telegraph, and Jonathan Liew, chief sports writer of The Independent, are rumoured to have turned down advances from The Athletic, as is a Guardian writer who reportedly turned down a salary of £150,000.

Journalists recruited by The Athletic posted cryptic messages to their tens of thousands of Twitter followers, saying they are joining a new venture, building excitement around its UK launch which is expected to be later this month.

As it did in the US, there is a strong suggestion the UK team will expand over time and cover other sports like rugby and motor racing.

For the time being, The Athletic is saying the focus is on football.

“We are looking forward to launching The Athletic’s written, audio, and video journalism in the UK. This is the home of the world’s most popular football league, of a wealth of brilliant writers and of fans with an insatiable appetite for coverage of their teams,” a spokesperson for The Athletic said.

We will wait every local paper out and let them continuously bleed until we are the last ones standing.

“The Athletic is building a line-up of the most talented and connected football journalists and our ambitious plans include not only comprehensive coverage of every Premier League club, but also highly localised football reporting beyond the top flight.”

The Athletic is the brainchild of Mather and Adam Hansmann, two American former executives at Silicon Valley subscription-based fitness company Strava, who are both under the age of 40.

The Athletic launched in Chicago in 2016 and has gathered momentum rapidly and now covers 50 cities in the US and Canada, reporting on sports including baseball, ice hockey, American football, basketball and motorsport. In the US and Canada, subscribers get a blend of written, podcast and video content.

According to a Bloomberg report last Monday, The Athletic claimed it had reached more than 500,000 subscribers and expects to nearly double that total by year-end.

The Tech Crunch website reported The Athletic has a 90 per cent retention rate as of last year, making it one of the biggest sports news outlets in the US.

Key to its success in the US has been its ability to poach well-regarded journalists amid a local journalism industry riven by financial woes and stagnating wages.

Some writers were financially incentivised based on them acquiring new subscribers through their articles, but a spokesperson for The Athletic said such a rewards scheme would not be used in the UK.

Mather is unequivocal about The Athletic’s ambition to revolutionise the sports journalism industry.

He told the New York Times: “We will wait every local paper out and let them continuously bleed until we are the last ones standing. We will suck them dry of their best talent at every moment. We will make business extremely difficult for them.”

Yorkshire Evening Post sports editor Nick Westby said: “I think The Athletic will be a breath of fresh air. It was a big blow for us at the time. We thought Phil [Hay] might get poached by one of the nationals.

“Ten years ago you only saw these writers’ names in the newspaper. But they have become brands themselves. Phil’s cachet was as great as the title he worked for.”

The Sun, which has not lost any journalists to The Athletic, believes the US title is not a direct competitor, pointing to The Athletic’s preference for longer form content.

“I think it’s a boost for sports journalism. It is a brave and bold move. We are all ready for the challenge,” said Sun head of sport Shaun Custis.

But Custis argues it will be “very difficult” for The Athletic to get enough subscribers on board to make it successful.

Sources at The Telegraph, meanwhile, said it had “resisted” approaches for its senior journalists while a correspondent at the Daily Mail stable of newspapers said “the arrival of of the Athletic is a good thing. It is a serious investment in sports journalism. Why would anyone see it negatively?”

But a number of experts question if The Athletic will be a success in the UK, given the welter of competition, particularly free content available to football fans.

Simon Chadwick, professor of Sports Enterprise, Salford Business School, is unconvinced the UK market will be as receptive as the US market.

He said: “I think the UK is arguably less dynamic and progressive a market place compared to the US. There is a big question whether you can easily transplant from one market to another.

“Traditional football fans have been brought up on diet of sports pages and have shown some reluctance to embrace new forms of content when free, let alone pay for it.

“When there is much free content, it’s going to have to be something pretty special for people to be actually induced into buying it.

“Is, for instance, Daniel Taylor head and shoulders above everyone else around? He’s a great writer. But I am not sure Daniel Taylor alone is sufficient alone to get all those Manchester United fans.”

Observers also point out the UK football coverage is so well served from regional, national newspapers, broadcasters and digital pure plays it has squeezed out a dedicated sports newspaper like Gazzetta dello Sport in Italy, L’Equipe in France and Marca in Spain.

Tim Thirlwall, the CEO of football media brand Copa90, says The Athletic will have to offer a broad range of content to entice subscribers.

“There are five or six subscriptions that we will tolerate where we get our video, TV and written word from. The Athletic is making a very big play to be one of those subscriptions,” he said.

“I personally think in time video content will have to form part of it. I think other membership services and other reasons to subscribe will have to come in.”

Crucial to its success is likely to be how long venture capitalists will continue investing millions in The Athletic, helping it establish its presence in the UK.

Mather has said The Athletic could introduce commercial tie-ups, such as partnering with teams on insider video or events in which subscribers go to the stadium early for exclusive access.

And while The Athletic for now remains an advertising-free subscription model, one of its investors has said advertising “has a very real opportunity down the road” adding that it would have to be “customer centric”.

For now, observers are excited by the arrival of the upstart from across the Atlantic.

Whether The Athletic gets off to a flyer or finds itself embroiled in a relegation fight will soon become clear.

– John Reynolds is a London-based freelance journalist who writes for a number of British national newspapers and trade titles.