King strikes late as Liverpool can’t hold on against Bournemouth 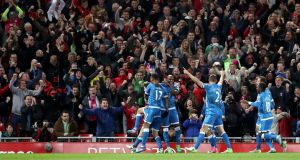 Bournemouth stalled Liverpool’s momentum for the second time this season as an 87th-minute equaliser from Joshua King denied Jürgen Klopp’s team three valuable points in their pursuit of Champions League qualification. Liverpool had dug in deep to put themselves on course for victory in the absence of Sadio Mané only for King to deflate Anfield at the last.

Benik Afobe gave Bournemouth an early lead from a mistake by Georginio Wijnaldum and during an awkward first-half display it would have been easy for Liverpool to fear another slip against a lower-placed opponent and the impact of Mané’s injury. Instead they fought back, Philippe Coutinho equalised and Mané’s replacement, Divock Origi, looked to have secured victory before the Bournemouth striker spun Ragnar Klavan inside the area and beat Simon Mignolet from close range.

Kenny Dalglish was on the Kop and Margaret Aspinall, chair of the Hillsborough Family Support Group, in the directors’ box as Liverpool paid tribute to the 96 people who were unlawfully killed at Hillsborough, the survivors and the families, in their final home game before the 28th anniversary of the disaster. Anfield will no longer hold a memorial service on April 15th at the request of the families.

On the pitch, Liverpool opened sharply with Roberto Firmino forcing the Bournemouth goalkeeper Artur Boruc to tip over inside the first minute. From the resulting corner by James Milner, Lucas Leiva flicked on at the near post and Dejan Lovren just failed to connect at the back. It was the bright, energetic start that Klopp wished for after the exertions of the Merseyside derby on Saturday but not sustained in what developed into a laboured and often careless first-half display.

Origi and Klavan replaced Mané and Joel Matip from the team that defeated Everton, Matip shifted to the substitutes’ bench by a back problem, but the change in personnel was not the biggest disruption to Liverpool’s performance. Their passing lacked the accuracy and pace of Saturday, their opponents were better too, and they gifted Bournemouth the lead before the visitors had constructed their first meaningful attack.

Liverpool appeared to have dealt with a Bournemouth throw on the left when Lucas dispossessed Charlie Daniels and Nathaniel Clyne turned the ball inside to Wijnaldum. The Holland international was immediately closed down by Harry Arter and played a wildly optimistic back pass under pressure towards the goalkeeper Mignolet. Benik Afobe was on to the ball in a flash, and before Mignolet could get anywhere near the intended pass the striker intercepted to finish low under the keeper. Wijnaldum’s reaction was one of despair – and justified.

Eddie Howe’s team took understandable confidence from Liverpool’s jitters, with Jack Wilshere and Arter impressing in central midfield. The visitors should have doubled their advantage during their brightest spell of the first half. Afobe threatened again when he took Daniels’ measured cross from the left on his chest behind Klavan only for Milner to clear off his toes as he shaped to shoot. From the corner, King’s header fell perfectly for Marc Pugh unmarked on the corner of the six-yard box but despite being prepared for the volley, he swept a first-time effort inches wide of the far post. A big miss.

Wijnaldum almost atoned with a 25-yard drive that Boruc saved neatly and Coutinho hit the side-netting with a difficult free-kick. Bournemouth were rarely under siege before the interval, however, but were undone by a combination of route one and class when Coutinho equalled Boro’s Juninho as the highest scoring Brazilian in the Premier League.

It was a long clearance from Mignolet that unsettled the visiting defence, with Steve Cook challenging Origi in the air and succeeding only in heading the ball on to Firmino. The Brazil international darted at the Bournemouth goal and threaded a millimetre-perfect pass between two defenders for his compatriot, who dragged the ball from under his feet before finishing expertly past Boruc.

Liverpool started the second half as they did the first, only now it was sustained and the basis for a much-improved display. Clyne came close to a stunning goal when he drove an angled shot towards the top corner only for Boruc to tip on to the crossbar. Klopp’s side took a merited lead when Origi found himself in the right place at the right time to score in front of the Kop for the second successive game.

It was a moment of redemption for Wijnaldum, who sold two Bournemouth players a dummy on the left of the penalty area and floated a cross that begged to be finished into the six-yard box. Origi duly obliged with a close-range header beyond the exposed Polish keeper but Bournemouth would not be denied.