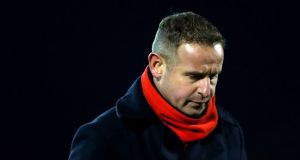 The Englishman was, in the way of these things, reported to have left the club by mutual agreement in the wake of what was described as a review of the season to date.

As they did last year, Rovers have made a poor start to the campaign, securing just five points from their opening seven games although results had, on the face of it, actually improved in more recent weeks with a 3-2 defeat of Bray and Monday night’s draw with Galway United making it four points from their last three outings.

Despite that, the team has conceded 17 goals already and with three teams going down this year there would have been nervousness around the Showgrounds regarding some of the performances and the fact that ground has already been lost.

“Everyone at Sligo Rovers would like to thank Dave for all of his hard work, dedication and commitment during his time as our manager,” said club chairman Martin Hegarty in a statement.

“He took over after a difficult season in 2015 and led us to a very creditable fifth place finish last year. I know that Dave has taken Sligo Rovers to his heart and will continue to be very supportive of club, staff and players moving forward. We wish Dave the very best of success in his future managerial career”.