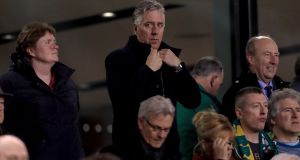 Minister for Sport, Shane Ross and Minister of State for Sport, Patrick O’Donovan have congratulated FAI chief executive John Delaney on his election to the Uefa Executive Committee.

Ross said on Wednesday that he: “would like to congratulate John Delaney on his election to the Uefa Executive Committee.

“This is a hugely positive development for Irish sport and for football, which will now have a significant voice at the decision-making end of the European game.”

Delaney gained 48 votes to finish second behind Karl-Erik Nilsson of Sweden in the poll of national federation representatives in Helsinki. Delaney’s total was high and he finished ahead of several of the European game’s most influential players including former Manchester United chief executive David Gill.

O’Donovan has also commented on the election, offering his congratulations: “John Delaney’s election to the Uefa Executive Committee raises the profile of Irish football, it is a positive step to have someone at the top table of European football.”

While Kieran Mulvey, Chairman of Sport Ireland, believes the election is a positive step for sport in the country: “On behalf of Sport Ireland I would like to congratulate John Delaney on his election to the Uefa Executive Committee. This is a very positive development, as one of the findings in the Rio Review, which is published today, is that Ireland needs more representation on international federations to influence decisions at the highest level. Sport Ireland welcomes that there will be an Irish voice on a key international federation.”

Delaney can expect to earn well in excess of €100,000 in the new role, which is for a four year term, but it is unclear whether he intends to waive any part of his salary with the association here. He becomes the first Irish member of the influential governing body of the European Federation since the retirement of Des Casey back in 2002.

FAI President Tony Fitzgerald said the elevation to the Executive Committee of Uefa was a “fantastic achievement and is a hugely positive reflection of Irish football in Europe.

“John has led the FAI successfully for more than 10 years overseeing the development of the game, initiating major infrastructure improvement and managing the financial well-being of the association in the most challenging of times,” he said.

“John’s strategic capabilities set him apart. His passion for the development of the home of football - the Aviva Stadium, in conjunction with the IRFU and the Government, the FAI National Training Centre in Abbotstown and the winning of major tournament bids are just some examples of the drive, determination and professionalism which earmarked John as a likely successful candidate within European football’s highest ranks.”

Delaney himself said that he was both “honoured and delighted” to become a Uefa Executive Committee member.

“I want to thank the football family in Ireland for their hard work and support on behalf of our sport. Our success today reflects their endeavours as they drive football on every day and every week,” said Delaney.

“I represent the 400,000 members of the football community in Ireland and I am privileged to lead the game at Executive level. However, the mainstay of our game are the volunteers - our Board, Council, Committees as well as our clubs and leagues - all of which I represent in my role as CEO and now Uefa Executive Committee member.

“While Ireland may be regarded as one of the smaller footballing nations, we are known for punching above our weight and I look forward to bringing our voice and our views and experiences to the table in Uefa.”