Minister of State Patrick O’Donovan: Change of mindest needed over women in sport 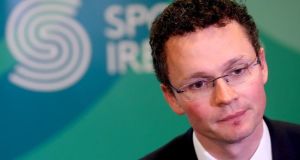 Minister of State for Tourism and Sport Patrick O’Donovan made contact with the FAI on Wednesday. Photograph: James Crombie/Inpho

Minister of State for Tourism and Sport Patrick O’Donovan made contact with the FAI on Wednesday to encourage them to sort out the problem regarding the women’s national football team.

Speaking at Sport Ireland’s announcement for Sports funding for 2017 and the launch of the Rio Review Mr O’Donovan said that it was “not good” that international football players should have to change in the public toilets at airports in order to return tracksuits to their national governing body, the Football Association of Ireland (FAI).

He added that there needs to be a change in mindset regarding women in sport in Ireland.

“We want it fixed and we want a process put in place. From what I gather that process has been committed to and what we’d encourage now is give people the space and the time, a short period of time, to get on with it and come to a resolution and to ultimately focus on Monday.”

Mr O’Donovan said that he had raised the matter of gender quotas on a number of occasions with sports organisations and that they needed to review the role women play in sport in Ireland.

“I’ve made my position very clear in relation to it,” he said. “I firmly believe there needs to be a change in mindset in Ireland in how we view the role of women in sport, both from a participation level and a governance point of view as well. I’ve enunciated this on more than one occasion.”

Mr O’Donovan also added that he did not think it was a good idea for the national football team to go on strike and encouraged mediation.

“Look I think it’s in everyone’s interests first of that there would be no strike. The players concerned, I’m sure their only concern is to be in the best possible place they can be to prepare for the game next Monday,” he said.

He added that in the event of negotiations breaking down between the FAI and its players, his department, despite awarding the FAI large amounts of public money, would not intervene.

“Our office don’t tell national governing bodies of sports what to do and what not to do,” said Mr O’Donovan.

“But I think I’ve made it as clear as possible on behalf of the Department. We want this issue sorted, we want the focus to be back on the field and we want the basic issues which seemed to have been put out into the public arena addressed.”

1 Waterford turn Kilkenny upside down and inside out
2 Waterford’s frenzied waves of attacks too much for Kilkenny
3 Jim McGuinness: There is a way to save championship and make it competitive
4 David Humphreys: Georgia simply can't be dropped in at the deep end
5 Klopp furious as injuries mount and VAR decisions prove costly
Real news has value SUBSCRIBE
Crossword Get access to over 6,000 interactive crosswords