Absence of Fernandinho from midfield leaves champions open to counter-attacks 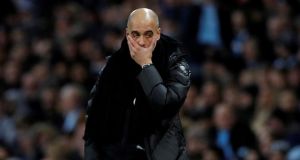 Manchester City manager Pep Guardiola knew what was coming against Manchester United but they proved incapable of stopping it. Photograph: Phil Noble/Reuters

Pep Guardiola had seen it coming. “It’s clear they are a counter-attacking team,” he said the day before his Manchester City side lost at home to Manchester United to drop 14 points off the lead in the Premier League. “When they defend deep, of course they attack immediately with [Daniel] James and [Marcus] Rashford. They are so clinical and so good with space to run.”

Yet though his team knew what Manchester United would try to do, they proved incapable of stopping it. Guardiola afterwards: “We concede four or five counter-attacks ... Every weekend it happens, all the teams, they are looking for this kind of situations. The way we play, the way we press, the way we make the build-up, we push them there. Teams defend deep and make the counter-attack ... normally we control it, today we struggle a little bit in the first half. Sometimes can happen.”

But why did it happen so often to City in that traumatic first half, and why do the two-time champions suddenly look as though they have aged several years in the space of a few weeks? To find the answer, you have to look back to decisions they made in the summer.

City had a couple of obvious issues to address during the last transfer window. The first was that their key central midfielder, Fernandinho, had turned 34 in May, and there are not many examples of players who can dominate Premier League midfields at 35. The second was that the long-serving club captain Vincent Kompany was leaving for Anderlecht.

They spent €70 million on Rodri as the back-up and long-term replacement for Fernandinho, but they decided that a direct replacement for Kompany would not be necessary. Instead, they spent another €65 million making João Cancelo the most expensive full-back in football, even though the regular player in Cancelo’s preferred right-back position, Kyle Walker, was still only 29 and had not been injured since 2015.

The decision not to replace Kompany was a calculated risk: with Aymeric Laporte, Nicolás Otamendi, John Stones and Eric Garcia already at the club, and Fernandinho able to play there if necessary, City reckoned they had enough to cover the position. The calculated risk was working well until August 31st, when it all went horribly wrong.

There didn’t seem to be much danger when Brighton’s Adam Webster got the ball in midfield and maybe that’s why Rodri, the closest midfielder, allowed him to run past where the more experienced Fernandinho would ruthlessly have taken him down. Now Webster knocked it past Laporte and ran, and it was in the act of making a foul that he should never have had to make that City’s most important defender damaged his knee. Without Laporte, who is both the strongest defender and the best passer from the back, they lost the next game 3-2 at Norwich, and they have been playing catch-up ever since.

Fortunately for City, Fernandinho has been resilient and consistent as ever, but every one of his 12 league appearances has been at centre-back. This was never supposed to be the plan, but it has turned out this way because of injuries and Guardiola’s lack of faith in the alternatives.

Initially Guardiola favoured Otamendi alongside Fernandinho, but that changed when City lost 2-0 to Wolves at the start of October. Otamendi’s mistakes cost City that day and though Guardiola did not point any fingers in public, Otamendi would not start another league game for nearly two months.

The problem is not so much that the defensive line of Walker-Stones-Fernandinho-Angeliño is simply not good enough, as that having to use Fernandinho in defence takes him out of the midfield, where he was so essential. His absence has exposed latent weaknesses. Unlike Jürgen Klopp, for whom physical strength and speed are non-negotiable qualities in a midfielder, Guardiola prioritises technical ability. David Silva, Bernardo Silva, Ilkay Gündogan and Kevin de Bruyne are all brilliant players but none of them is much use stopping a counter-attack.

Rodri was meant to help solve this problem, but he is innocent compared with Fernandinho, whose ability to stop counters by fair means or foul was the main reason why City conceded zero league goals to counter-attacks last season. This season they’ve already conceded two, and their vulnerability had already been exposed twice by fast Manchester United attacks by the time Rashford won the penalty for the first goal.

That penalty was given away by Bernardo Silva, who was only on the scene because he had to sprint back 70 yards to cover for Walker, who had given the ball away while leading an attack through the centre. The second goal came when Rashford beat de Bruyne to a loose ball in midfield and brought Anthony Martial and James into play, and together they outwitted what remained of City’s defence.

On both goals Rodri was bypassed too easily and failed to exert any influence on what happened. Such mistakes are to be expected from a player who is still learning a new position – at Atletico Madrid he generally had another defensive midfielder alongside him, whereas at City he is expected to do the job by himself.

Yet when you analyse how City’s problems this season have flowed from a shortage of resources in central defence and midfield, you do wonder why they spent almost half their total summer transfer budget on a reserve right-back. This is surely a mistake more costly than any made by Otamendi. Cancelo has featured in only six of 16 matches in the league, though after Walker’s mistakes against United and Liverpool, he might soon be seeing more regular action.

The victory sealed Ole Gunnar Solskjaer’s best week at Manchester United since he became permanent manager in March. Once again, his team defied the pre-match odds to defeat an opponent who dominated possession, as happened last season at Spurs, Arsenal, Chelsea and PSG. The best results this season – wins against Chelsea, Leicester, and Spurs, and a draw against Liverpool – have followed a similar pattern, with the opponent having more of the ball but unable to prevent United hurting them on the break.

The key man in most of these games has been Rashford, who started eight of the nine matches and scored in seven of them. He loves this kind of game, where the space opens up for him to use his speed, dribbling ability and unpredictable shooting to best effect. With the possible exception of Jamie Vardy there is no more dangerous counter-attacking forward in the Premier League. The problem of how to win games against opponents who defend deep remains, but beating José Mourinho and Guardiola in the space of four days gives Solskjaer time to prove he can solve it.