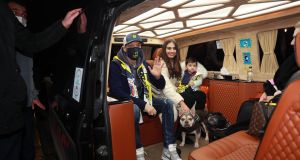 Mesut Oezil on a plane upon his arrival at Istanbul, Turkey, on January 18th. He terminated his contract with Arsenal in order to complete his transfer to Fenerbahce. Photograph: EPA

Not every footballer dazzles on the first impression, but Mesut Özil is one whom I vividly remember seeing play for the first time. It was on October 10th, 2009, in a World Cup qualifier between Russia and Germany at the Luzhniki in Moscow. I hadn’t tuned in specifically to see Özil – strange as it now seems, the box-office player in that game was Andrei Arshavin, whose career at Arsenal was already beginning to derail.

Instead it was Özil who caught the eye. On 35 minutes he created the game’s only goal – drifting in off the left, he played a one-two with Lukas Podolski, accelerated to the corner of the six-yard box, sat the ’keeper down with a calm feint and chopped the ball back to Miroslav Klose for the tap-in. It wasn’t really the match-winning moment itself that left such an imprint on the memory so much as a hard-to-define quality – a kind of uncanny smoothness – that suffused his movement, his control and his passing.

8 Nanny state? After the mess here in Texas, I’d give my right arm to live in one

13 Moses Farrow: ‘I felt inherently like I was a bad kid. The abuse at home reinforced that’

15 Frost dispenses with the manual of diplomacy for NI protocol

19 Loyalists and the Irish Sea border: ‘From what I’ve seen it’s all hyped up’

20 All Creatures Great and Small: Who was the real James Herriot?

26 Will the new first-time buyer plan push up house prices?

32 I, Tonya reveals a deeper truth than Harding’s level of guilt

33 Gabriel Byrne on Weinstein: ‘He was a violent bully. He had such power’

38 What a work-from-home space should cost: Converted attic, garden office or spare room