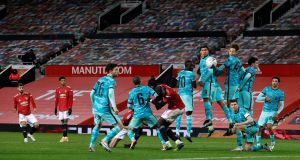 This was a thriller of a cup tie, Manchester United emerging on the right end of a 3-2 scoreline courtesy of Bruno Fernandes’s late winner. It means Liverpool have only one win from their last seven outings – and this against Aston Villa’s kids in the previous round – and United roll on in the competition to face West Ham here next month.

For Jürgen Klopp the questions will mount. The truth is that United were the dominant force, while the visitors were never truly composed, neither able to control the ball or deal with the home team’s pace.

Mohamed Salah opened the scoring in the 18th minute, this deriving from clever movement from Roberto Firmino, who dropped off the front and hit a pinpoint pass into the Egyptian, whose chip over Dean Henderson oozed class.

Firmino was firmly in the mood, orchestrating Liverpool in familiar fashion: he next drew a foul from Scott McTominay, but Trent Alexander-Arnold’s free-kick sailed over and moments later United equalised.

The ball went to Marcus Rashford as United broke and as Salah backed off, he turned infield and lifted a 40-yard diagonal to Mason Greenwood on the right, the ball barely missing James Milner’s head. From here the forward’s right-foot strike was cool-eyed, his fourth of the season allowing Alisson no chance.

Liverpool, though, remained a danger. Curtis Jones pickpocketed McTominay in traffic, the move swept left, Andy Robertson lobbed the ball over, but there was Luke Shaw to head away.

The good news for Liverpool was the scores were level as the second half began, the bad news that this status lasted only three minutes. United were again ruthless on the break: Edinson Cavani tapped to Greenwood and his through ball was missed badly by Rhys Williams. Rashford took over and the strike was never in doubt, the 23-year-old’s 15th goal of the campaign going in to Alisson’s left.

The home side were in the ascendancy so will have been particularly upset at how they contributed to Liverpool’s second, just before the hour. Henderson fed a goal-kick to Maguire, who found Cavani in midfield, but he carelessly ceded possession to Milner. The ball went left to Firmino, his delivery was dummied by an on-running Milner, and Salah made no mistake.

A Klopp fist-punch was followed by the introduction of Sadio Mané for Georginio Wijnaldum, a move Solskjær answered by swapping Donny Van de Beek and Greenwood for Fred and Fernandes.

For a passage Liverpool had become the aggressor, United pocked by errors from among others McTominay, whose loose ball was indicative of the turnaround.

When Paul Pogba skated down the right to have Liverpool in firefighting mode this had become a rarity, relief coming in the midfielder spooning the ball into Alisson’s gloves.

This season’s United have definite backbone, though. So it was that Cavani won a free-kick under Fabinho’s challenge and up stepped Fernandes to drill home a sweet 16th for the Portuguese, as this entertaining contest took its latest and decisive turn in the 78th minute.

By the close each side might have registered again but this was the right result as United’s campaign continues upwards and Liverpool’s in the opposite direction. – Guardian