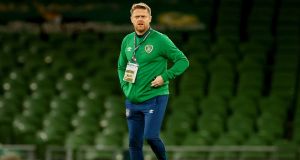 Damien Duff: while you can easily imagine why he might have fallen out of love with the job, walking away after eight months without a clear explanation leaves an impression of flakiness. Photograph: James Crombie

From the outset, Stephen Kenny’s Ireland regime has been stalked by random misfortune. Damien Duff had appeared to be one of the new set-up’s best assets, so of course it now feels quite natural that he should suddenly walk away after eight games for no apparent reason.

Over the weekend, a picture emerged of Duff having grown frustrated with the FAI, upset in particular by its handling of the storm in a teacup set off by the motivational video shown to the players before the England game in November.

The FAI, if you recall, had responded to enquiries from the Daily Mail about that pre-match video by issuing a statement saying they were “aware of issues surrounding content shared with our Republic of Ireland senior men’s team” and were “looking into this internally as a matter of urgency”. In the days that followed, then-CEO Garry Owens carried out the promised investigation, interviewing various people in the organisation, including Duff, and ultimately deciding there was no case to answer.

Duff had made his annoyance with the video episode plain during an appearance on RTÉ’s Champions League coverage on December 8th.

“It’s obviously up to us staff not to make any motivational videos because even if they’re based on true historic events, Irish events that you should be proud of, they can be very offensive to some people, so we’ll stay away from that next time in March,” he said, with heavy sarcasm.

Pointedly referring to “some people” without revealing who they were, Duff echoed the tone of Kenny’s comments in a press conference the previous day.

“I think there may be people behind the scenes or elsewhere who want to cause problems for the team or don’t have the best interests of the team, but certainly I have no problem with anyone in the dressing room,” Kenny had said.

Duff’s and Kenny’s remarks were heart-sinking moments for anyone who wanted their new management team to succeed. You don’t win these battles by being passive-aggressive. If you’re not prepared to name the problem, then you might as well keep quiet about it. Dropping hints but declining to elaborate, they succeeded only in creating the impression that there was some kind of internal power struggle at the FAI, and that they were losing it.

Friday’s news suggests that Duff’s disgruntlement ran deeper than we had expected. It leaves you wondering: how can he possibly have been surprised to discover that the FAI was dysfunctional and difficult to work for? From the outside, you wonder if the decision was not influenced by some deeper disillusionment with what must, at least some of the time, have seemed like the utter pointlessness of his job.

Imagine yourself in his position. You’re a respected, highly-qualified young coach, eager to pass on your knowledge to the next generation of Irish footballers. You join an optimistic, progressive new regime, which has boldly promised to drag Ireland out of the football dark ages. You spend the summer studying the options, coming up with ideas, laying plans. You select that first international squad, and it feels as though you might be on the cusp of something big.

Then the matches start and it’s like the moment when the landing craft door swings open in Saving Private Ryan. Injuries, Covid and Covid contacts tear through the squad. Replacements are hurriedly drafted in, joining up the weird, socially distanced camp in the dead team hotel. There is hardly any time to train. You had hoped to school the players in the patterns of the Irish football of the future, but the teams you’ve had to cobble together have barely had time to learn each other’s names.

You sit in empty stadiums, watching Ireland fail to win a series of grimly depressing matches. The team endures an all-time record goal drought. You have to listen to people moaning about the team being terrible, like Germans in 1946 complaining bitterly to the town council that the roads are full of potholes.

On top of all this, the Daily Mail insinuates that your motivational techniques border on hate speech, and your bosses announce they are investigating. You can see why somebody might start to wonder: do I really need this?

And yet, while you can easily imagine why Duff might have fallen out of love with the job, walking away after eight months without a clear explanation leaves an unavoidable impression of flakiness.

What else did he expect when he signed up to work with this FAI and this Ireland team? It was always going to be like rolling a stone up a hill, and watching it roll down again.

His departure does not help Stephen Kenny, whose goalkeeping coach, Alan Kelly, pulled out of the last match citing concerns over his health. In the absence of good results, the only way Kenny can persuade people that the team can go places under his management is by projecting a sense of certainty that it’s all going to work out.

It would help if his team could give the impression of being a unified group, striving with confidence towards their goal, but right now that seems to be beyond the coaches, never mind the players.

You wonder what the people of Mayo GAA think. Every day they roll that stone up the hill, while simultaneously having their liver pecked out by birds and being forced to watch as their son’s wax wings melt and he plummets thousands of feet to crash into the ocean. And the next day they do it all over again, because they understand that football is all about suffering. Whoever Kenny brings in to replace Duff will hopefully understand it too.