‘We’ve found a way of playing that we believe in, that the players believe in’ says Old Trafford boss 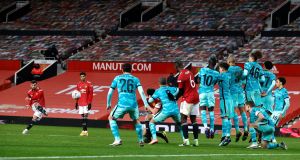 Bruno Fernandes fires home from a free-kick to give Manchester United victory over Liverpool in the FA Cup fourth round clash at Old Trafford. Photograph: Phil Noble - Pool/Getty Images)

Ole Gunnar Solskjær hailed a “statement win” for Manchester United after Liverpool were beaten 3-2 in the FA Cup fourth round at Old Trafford.

An entertaining cup tie was decided by Bruno Fernandes’ late free-kick as United progressed to meet West Ham in the next round at home. Solskjær admitted he was particularly pleased with the manner of victory – his first against major rivals Liverpool at the fifth attempt.

“For us it’s a good feeling, to play on our terms,” the manager said.

“We’ve found a way of playing that we believe in, that the players believe in. We are getting stronger and stronger. We’ve had some good results previously, going with a diamond or a 3-5-2 to nullify the opponents. But today we had positive selection, that’s the statement to ourselves, [a] confidence boost that we can match the best with our style of football.”

Solskjær scored the winner when United beat Liverpool in the FA Cup fourth round in 1999 as United went on to claim a historic treble. The manager was asked if Sunday’s result could also be pivotal to success this year.

“Definitely in the dressing room now is a great atmosphere, but I will answer you on Wednesday [after hosting Sheffield United],” Solskjær said.

“I want to see the reaction, how we mentally go again. Everyone is elated and on a high, they should be. But tomorrow morning I want to see players thinking about Wednesday, not today.”

One concern is a knee injury suffered by Marcus Rashford, who had created Mason Greenwood’s equaliser after Mohamed Salah opened the scoring before later giving United a 2-1 lead.

“Marcus will have to do a scan – hopefully it is not too bad, we will see tomorrow,” Solskjær said.

Solskjær said of the irrepressible match-winner Fernandes: “When you leave him out like I did today, he stayed about 45 minutes after training yesterday shooting free-kicks so I was pretty confident he could score one if he got the chance. He’s never happy with me when I tell him to go inside after training when he’s playing the next day so he got some practice yesterday.”

Fernandes himself made little of the winning score.

“I’m happy because we win, nothing more,” said Fernandes. “Most important was going to the next round. It doesn’t matter who scores but if I score I am happy. I work hard on free-kicks. Cavani told me to try on the other side of the keeper. We played well and over the 90 minutes it was a good game for both teams. I know now the fans are happy and will have a good week.”

Solskjær also said that Jesse Lingard may leave in the current window.

For Jürgen Klopp the loss continued Liverpool’s concerning slump, his team managing only one win in seven matches.

“It’s not what we wanted so it’s frustrating,” said the manager. “But we made a lot of steps in the right direction.”

“You could see the boys really wanted to change the fortune, they wanted to score goals and that’s good. We did that, we scored twice, which is good as well. That’s all okay but in the end they scored three, we scored two and they are through. But we can take positives out of this game, of course – I saw a lot of steps in the right direction and that’s all good.”

After watching the way his side were undone on the break by United, he said they would need to work on the training ground this week to prepare for the trip to Tottenham Hotspur who also rely heavily on counter-attacking.

“Don’t worry about us, as a group we are really together and we have to solve it together,” said the German. “We are just in this moment and we try to win football games again.”