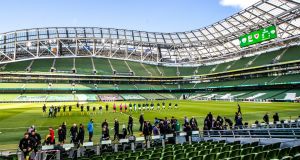 The Aviva Stadium has hosted 18 matches behind closed doors between soccer and rugby. Photo: James Crombie/Inpho

FAI CEO Jonathan Hill says he believes Uefa still intends to proceed with staging the European Championships across 12 cities, including Dublin, this summer but feels that the tournament will go ahead behind closed doors if there ongoing doubts about allowing spectators in to watch the games.

“March 5th is what Uefa are talking to all of the 12 cities about at the moment (in terms of a final decision being announced) but to be absolutely clear they are committed to each of those 12 cities and to that concept,” Hill told an industry conference organised by Sport for Business.

“But look, it would be foolish to say that there are challenges in relation to a concept that was created a number of years ago, pre-pandemic and we here in Ireland will always follow government advice and the directives here from Nphet.

“We will need to work hard to make sure that we can deliver, fingers crossed, the maximum number of attendees into the stadium itself.

“Uefa do have some big decisions to make,” he acknowledged, however. “Number one, they want to get the tournament away, which they will do, even if it has to happen behind closed doors. I don’t think that will be the case but that’s obviously, from a commercial perspective, extremely important in relation to the broadcast side of things.

“But they genuinely want, as we all want, to have as many people as possible in the stadia because that’s what creates the excitement and that unique feeling around any tournament, and we want to see that around Euro 2020, we want to see that in relation to our own World Cup qualification campaign and, fingers crossed, we can have 54,000 Irish fans in the Aviva Stadium, driving us on against Portugal and driving us forward into qualification for the World Cup.”

Hill’s comments come came as Bayern Munich CEO Karl-Heinz Rummeneige suggested that Uefa president Aleksander Ceferin is actively considering a switch to staging the tournament in just one country because of the challenges posed by the ongoing pandemic.

Speaking at the same event as Hill on Thursday morning, Aviva stadium director Martin Murphy, said that the venue would need just a fortnight’s notice in order to facilitate large crowds at sports events again and suggested that he feels that substantial numbers of spectators can be safely accommodated quickly once the coronavirus situation eases.

“We’ve run 18 matches behind closed doors in very tightly controlled circumstances between August and December and that has given us a lot of experience,” he said. “It’s given us the confidence to know that if we plan things properly, which we will, we can bring people back safely.

“Provided we’ve engaged with Nphet and the health authorities to make sure that they’re happy with our plans, it could be done within two weeks, in my view. There would be a challenge in terms of getting ticketing out but that that’s a logistical challenge that can be overcome. So it can be done very quickly.”

The planning that has gone into Euro 2020 so far, he suggested, has led to very strong channels of communication between the various parties and there are no differences over how to proceed.

“There is a very good communication between ourselves and all of the stakeholders on the back of the Euro planning,” he said.

“The Euros has been a project that’s been going on for three years and it involves all of the elements of the state, the government the city, the statutory authorities and that project has actually has improved our lines of communication immeasurably.

“So, everybody is pulling in the right direction. And we’re all conscious of the concerns and the issues that each other has. There’s nobody trying to push this through blindly with without cognisance of what the bigger issues are.”