Ken Early: To fix Chelsea’s problems Frank Lampard should look at himself first 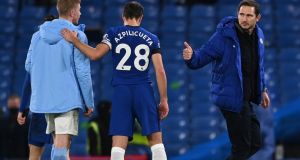 There are few feelings in football quite as awkward as going in at half-time 3-0 down at home to a rival team. When Kevin de Bruyne swept in Manchester City’s third on 34 minutes, Frank Lampard and his Chelsea players knew they had a full hour of play left to marinate in the certainty of defeat, while dreading the possibility that it could get even worse.

There was huge interest in how Lampard might react to this latest humiliation, given the way he had torched his players after last week’s 3-1 defeat to Arsenal. “I take responsibility on the outside, but the players have to take the responsibility,” he had said then, adding “some things in football are basics. It’s not tactics, or systems, it’s: do you wanna run, do you wanna back your team-mate up, do you wanna sprint? Or do you wanna jog, and do you wanna say ‘oh, maybe I don’t have to run,’ and we took that decision rather than the right one.”

If the intended audience for last week’s rant was the lazy players in the dressing room, yesterday Lampard sounded like he was pleading his case before the bosses. “We’re in a little period. A five-, six-game period that none of us like. I think if you go back to the first year of City, in this regime, or Liverpool, there were periods of pain. And you have to fight through that.”

Here Lampard was echoing his own pre-match comments, where he had said that “the process is sometimes tough... You would’ve seen that perhaps in year one, two or three at Liverpool under Jurgen Klopp, year one under Pep Guardiola.”

This seems like the sort of thing you probably shouldn’t say about yourself – like the kind of argument a rookie manager like Lampard might be better off leaving allies to make on his behalf. But since he was confident enough to draw the comparison, it seems reasonable to ask whether there is anything to it. Is Lampard plus Time a credible formula for creating a Guardiola or a Klopp?

Lampard was correct that Guardiola and Klopp went through some “little periods” in their first or second seasons, although they were never quite as bad as the period Chelsea are currently enduring; you will scour the records in vain looking for an example of Guardiola’s City or Klopp’s Liverpool losing four times in six Premier League games, as Chelsea have just done.

However, it is simply not true to suggest either Guardiola or Klopp ever went through periods when the job seemed to be beyond them, where they wandered alone in the wilderness, and everyone seemed to have deserted them, before their malfunctioning teams suddenly came together, rewarding the wisdom and patience of their club owners.

In fact it was plain from their first weeks in the jobs that Guardiola and Klopp each had the capacity to take their teams to the next level. Guardiola laid down an early marker with a 2-1 win over José Mourinho’s Manchester United, when City dominated Old Trafford with the signature Guardiola style already familiar from Munich and Barcelona. By the time Guardiola had been in charge at City as long as Lampard has been at Chelsea, his team were already halfway through a record 100-point title-winning season: a historically unprecedented level of dominance.

Liverpool took longer to approach that level, because the team Klopp took over was much weaker than the one Guardiola took over at City (or the one Lampard took over at Chelsea). But their improvement under Klopp was both immediate and sustained. Seldom can there have been many clearer cases of a new manager having an instant positive impact on a team.

Klopp arrived in October of the 2015-16 season and Liverpool’s performances improved - immediately - with statement wins at Chelsea and Manchester City. They improved because Klopp brought a new attitude, new ideas, a new on-field identity that excited fans and team alike. Players like Roberto Firmino, James Milner and Adam Lallana who had seemed lost under his predecessor, began to shine. By the end of the campaign, a side that 12 months earlier had looked absolute no-hopers had beaten Manchester United and Dortmund to reach the Europa League final. By that point it was already clear that Klopp could be a transformative manager for Liverpool.

What has Lampard done to consider himself worthy of comparison with these coaches, who had both won major titles in other countries before taking on their current jobs? Where are his landmark victories? Where is his player development? Where is Chelsea’s identity? Lampard’s second season has been the story of him failing to figure out how to get the best out of one of Europe’s strongest squads. The idea that in the fullness of time he will naturally metamorphose into a Klopp or a Guardiola is delusional. It is worse than a lack of respect. It displays a crass ignorance about what these coaches actually do that makes you doubt Lampard’s ability ever to emulate their achievements.

A more relevant comparison for Lampard is Ole Gunnar Solskjaer at Manchester United, who’s also had to handle awkward moments this season, including going in at half-time three goals down at home against a rival. But when Manchester United lost 6-1 to Spurs, Solskjaer resisted the temptation either to suggest he was only a couple of years from equalling the best coaches in the game, or to attack his players for deciding not to run. “I hold my hand up, it is my fault,” he said. “It’s very embarrassing, it hurt all the players, it hurts me as the manager. It’s my worst day ever.” It stings to be that humble, but if Lampard in some future downtime wants to understand why he got outperformed for 18 months by an unheralded coach like Solskjaer, that episode might be a useful place to begin.