Ken Early: Manchester City are saviours of the Premier League 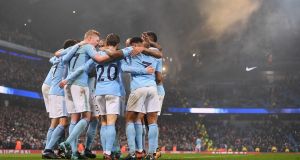 Of all the strong Premier League teams who have been made to look average by Manchester City this season, the reversal might be most painful for Spurs. Last season they finished eight points ahead of City. On Saturday they were thrashed out of sight by a side that now sits 21 points ahead of them after only 18 matches.

How has this happened? Spurs, of course, were one of the sides that helped to facilitate City’s summer rebuilding, selling them Kyle Walker for £50 million. But Kyle Walker was not the only familiar face in the City line-up. Spurs’ chief tormentors, Kevin de Bruyne, Leroy Sané and Raheem Sterling all played in both matches between these sides last season. Yet last season Spurs took four points from those matches. What has changed?

Walker, obviously, has made a contribution. Guardiola spent £120 million on full-backs in the summer: he sees full-backs as the lungs of the team, and the ones City had last season – Bacary Sagna, Gael Clichy and Pablo Zabaleta – were all several years past their best.

But the new full-backs have not made as huge an impact as he would have hoped. Benjamin Mendy played only five matches before tearing a cruciate ligament, and Danilo has found himself kept out of the team by Fabian Delph, another player who was there last season. So Walker aside, City’s new, mean defence has been made up of players who were part of last season’s squad: John Stones, Nicolás Otamendi, a converted midfielder in Fabian Delph, and Eliaquim Mangala, who spent the year on loan at Valencia.

The key difference has been made by the goalkeeper, Ederson. He may not be in David de Gea’s league as a shot-stopper – though it is hard to tell, as City’s goalkeeper faces so few shots. De Gea has made more saves than anyone else in the league, while Ederson has made fewer than any regular goalkeeper except Simon Mignolet, because City, like Liverpool, defend by keeping the ball far away from their goal.

Last season, City’s games followed much the same pattern, as they dominated the ball and allowed very few shots on goal. The difference was that City’s goalkeeper then, Claudio Bravo, was letting in nearly all of those few shots. His vulnerability drained the confidence from City’s back line while inspiring their opponents. Signing Ederson has solved the problem at a stroke.

City aren’t really racing against the teams below them any more. They are racing against ghosts: the best teams of the past 25 years. They are in a competition against the four past Premier League teams that can be described as great: the Manchester United treble winners of 1999-2001, the Arsenal Invincibles of 2002-2004, Mourinho’s Chelsea of 2004-2006 and Ferguson’s last great United side of 2007-2009.

Which of these teams you think the best is largely a matter of taste. Arsenal were the only ones who won the league without losing, while Chelsea set a points record that still stands. United fans could argue that while each of these sides won the Premier League more than once, only United managed to win the Champions League. But while the Champions League is the top prize in club football, winning it does not make you a great side: Liverpool won in 2005 and Chelsea in 2012 with nonvintage teams.

Really, the legacy of these sides is less about the trophies they won than the impression they left. Somebody wins the trophies every year, and most of the winners are forgotten just like all the losers. It’s rarer to watch a side that gives you the feeling that they are unbeatable.

All of these teams had a distinctive identity, unique characteristics that everyone who watched them can remember and that, at the time, nobody had seen before. The United treble team had those spectacular crosses from David Beckham towards Dwight Yorke and Andy Cole. Everybody knew what was coming and nobody knew how to stop it. Wenger’s Invincibles were the fastest team anyone had seen, with the mesmerising one-touch interplay down the left between Ashley Cole, Robert Pires and Thierry Henry.

Chelsea were the most powerful team to play in the league until that point, with players such as John Terry, Frank Lampard and Didier Drogba along the spine; they were almost impossible to score against and could score all kinds of goals, from Terry headers to surgical Arjen Robben dribbles to Lampard’s uncanny deflections.

The later United team combined the rock-solid defending of Chelsea with a fluid attacking system that, instead of a central striker, relied on telepathic interplay between three fast forwards, Ronaldo, Rooney and Tevez, who between them scored almost 75 per cent of the team’s goals.

City are already displaying the originality usually associated with a great side, at least in the context of English football. To be considered alongside the best United, Arsenal and Chelsea sides, they must win the league, of course, and if they fail to add the Champions League it will always be held against them. But their record-breaking form gives reason to hope that the Premier League’s mediocre years are over.

For 10 years from 1999, the league contained at least one great side. In 2009 Ronaldo left United for Real Madrid and since then the Premier League has failed to produce any great team. No team has retained the title since 2009 and the Champions League performances of English sides have mostly been embarrassing. City’s current excellence is long overdue, and as for the clubs left trailing in their wake, they should see this competition as a good thing. City might seem uncatchable now, but if the rival teams put everything into trying to reach that level, they might surprise themselves.