Man City present a problem that nobody seems able to solve 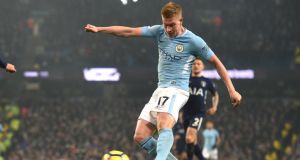 The title race is done, Manchester City’s excellence beyond all previous experience.

They’re less a football team now than one of those apparently unsolvable maths problems: Fermat’s Last Theorem, the Riemann Hypothesis, the Hodge Conjecture, the Guardiola Impossibility.

How on earth do you beat them? Soon some American foundation will put up a prize to stimulate investigation. In 30 years, there will be a biopic about the savant who finally achieves it, his Eureka moment captured in a montage of unslept nights, screwed up paper and huge roller blackboards from which chalked formulae spew.

Perhaps we need Brendan Rodgers back with his tea and toast and long dark nights of the goal at Melwood.

Mauricio Pochettino tried. He did not just pack men behind the ball. He did not look to deny City space and scrap and spoil. As he has done before against Pep Guardiola sides, he tried to pressure them, to squeeze them high up the pitch.

The theory, at least, is sound; had Tottenham won, Pochettino would have become the first manager to beat Guardiola three times in league games. No manager has achieved more victories against Guardiola than Jürgen Klopp, whose method is always to press high.

An early goal-kick gave notice of Spurs’ approach with their three forward players positioned high to prevent Ederson playing the ball short to either full-back or Fernandinho.

And they did trouble City for periods, they did make them change their style of play, they didn’t let them settle into their usual rhythm. They were still comfortably beaten. City only had 53 per cent possession against a season average of 65.5 per cent. Tottenham had more of the ball against them than any other side this season. And it didn’t matter.

That’s perhaps the greatest strength of this City side: they can strangle you with possession, but they can also hammer you with rapid transitions. Play a high line and they will use their pace to get in behind you; play a low block and, although Guardiola will get irritated if you do it well enough, City will eventually wear you down. And, most surprisingly of all, they have developed a recent habit of scoring key goals in big games from set plays.

Ederson, denied the possibility of rolling the ball out short, took to pinging accurate passes towards the halfway line instead. Overall in the league this season he averages 3.7 long balls per game. On Saturday, he hit 19. His pass completion, it’s true, did drop from a season average of 83.6 per cent to 78.8 per cent but by and large he still found his man; it’s just that man tended to be 50 yards further up the pitch.

Yet it was hard to avoid the thought that Tottenham were complicit in their own downfall. It’s probably the case that City’s relentlessness, both with the ball and without, creates pressure and leads to errors, but still, there were needless moments of sloppiness.

The opening goal was perhaps the most eye-catching example as Dele Alli ended up jumping into Harry Kane while Harry Winks looked on, allowing Ilkay Gundogan to wander in and head Leroy Sané’s corner in unchallenged. But there were also numerous barely explicable misplaced passes in the City half. Their pass accuracy was down to 79.9 per cent from a season average of 84.2 per cent.

Perhaps it would have been different had at least one of Toby Alderweireld, Davinson Sánchez and Victor Wanyama been available and Tottenham, as they had against Real Madrid, had been able to field a back three. Certainly then there would have been extra protection for Kieran Tripper, and his struggles against Sané might not have been quite so damaging. Perhaps – but you suspect City would still have found a way.

So how do you stop them? The decisive shift in Guardiola’s final season with Barcelona came when teams – first Marcelo Bielsa’s Athletic and then José Mourinho’s Real Madrid, in the second leg of a Copa del Rey game having gone 4-1 down on aggregate – were emboldened to take the game to them. It became apparent that their weakness was at the back and so the best way to combat them was, in a controlled way, to try to take advantage of that.

But this City are more versatile. That’s not to say they’re better, but they are more varied in approach. They can beat opponents in a number of different ways. Pochettino’s gamble made a certain sense, to try to disrupt City high up the pitch, to pressure them where they are weakest, but to play like that entails a dreadful risk.

City are now so good, their reputation so awesome, that many opponents seek no more against them than simply to avoid humiliation. That’s not good for the spectacle and it’s not good for the league, but it’s a right City have earned. At the moment they present a problem that nobody seems able to solve.

1 Tipperary and Cavan deliver two earthquakes in one day
2 Munster beat Glasgow to keep their winning streak going
3 Every kind of wind imaginable was against Tipperary football - and they came through
4 The Offload: Ireland are stuck in no man’s land
5 How a visit from his barber helped Kyle Sinckler get back to his best
Real news has value SUBSCRIBE