Respect for the game, respect for PFM, competitive respect, how much can there be? 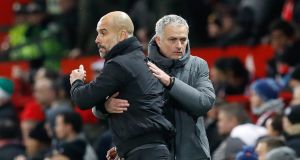 Is there a more elastic concept in modern football than “respect”? There certainly isn’t a more self-regardingly irritating one. Endlessly demanded, its absence or insufficiency endlessly condemned, “respect” is mostly a ball game for people too insecure to settle things with a ball game.

Various instances of disrespect are held to have been committed at Old Trafford on Sunday, both during and in the wake of Manchester United’s defeat to Manchester City. By way of recap: there was some loud music, some milk, some pinching and scratching, and the Daily Mail surreptitiously repurposed its biannual Alma Tunnel graphic for the incident. “You fucking show respect!” José Mourinho is reported to have shrieked at some Manchester City players, a reminder that you can order people to respect you about as effectively as you can order people to love you.

I assume some sort of Warren Commission will be set up to investigate this incident – ideally helmed by Warren Barton – but anticipate it won’t get near the truth. Which is that there is already far too much “respect” in football. Here follows a round 10 of the types of respect tainting football – but it is by no means exhaustive. There will be more (there are always more) and you are cordially invited to get in touch with the types of “respect” you respect the very least.

Respect for another club’s ground

Remember a football match is exactly analogous to being invited to someone’s house, plied with exquisite hospitality and then repaying it by leaving something unspeakable on their carpet. Even within the mind of one man, it is possible to tear up the carpet by doing doughnuts on it as Porto manager, then acquire the house in a repossession sale and suddenly start acting like that carpet means more than your mother to you. Don’t try to understand this – just respect it.

Respect just because someone asked for it

We could spend a long time examining the logical flaws in this nonsense. But it would still be a less perfect illustration than Michael Carrick’s reported intervention in the tunnel twattery on Sunday. As the Mail has it: “Michael Carrick tried to act as a peacemaker as the trouble flared and could be heard screaming ‘show some fucking respect’ at the City players.”

Always ghastly and hideously widespread. Younger players must respect their elders whatever the circumstances. Certain types of player must automatically defer to their betters. “I don’t think Joey Barton should talk about me and Steven Gerrard, ” Frank Lampard once sniffed of Joey Barton. “That probably says enough.” All current players, meanwhile, must worshipfully respect all former player pundits. Even upstart TV channels are supposed to respect Match of the Day, or Sky Sports, or whoever it is this week. There can be only one conclusion. Football desperately needs its own version of the “centrist dad” insult destined to deter Labour moderates from explaining to those who disagree with them why they’re automatically entitled to respect.

This is regarded as constantly hanging by a thread, typically by people who have done the most to undermine it. The FA worries about it a lot, for instance. Meanwhile, back when Steve McClaren was under fire from England fans, a hanky-clutching Alex Ferguson blamed the X Factor for the “mocking culture” that resulted in managers being disrespected. Don’t eyeroll – it’s disrespectful.

One of the greatest ways to pay tribute to a football authority figure, in that you are literally paying them tribute. A £5,000-a-week shortfall of financial respect once caused Ashley Cole to nearly swerve his Aston Martin off the North Circular. Financial respect saves lives.

Respect for the traditions of the game

Whatever these are. They seem primarily distilled in the managers’ handshake, a magically respectful gesture that destroys all lip-readable footage of the past 90 minutes. Being called a series of eye-watering things is fine; declining to shake hands with the person who called you them is disrespectful.

You need to understand Proper Football Men are as under threat as blue whales, despite the fact four of the species alone have been passing incredibly lucrative managerial jobs between them for a decade. If you’d like to personally force-feed each of their careers 100 plastic bags, you’re part of the problem. It’s people like you who are ruining the game.

Probably my most despised form of respect, this is the respect England players are demanded to pay if they play within 100 miles of some war graves or a concentration camp. If they don’t visit these sites, they are being disrespectful. If they do go, disrespect must be mined from other sources, usually sartorial. Did they wear a tracksuit? Did they wear headphones on the bus? Did millions die so some dick with a keyboard could reduce them to the level of plot device in the bigger story of what arses footballers are?

Respect for the game

For others, this will be the big one, because it has proper Mickey Mouse laws protecting it. To wit: the Football Association crime of “bringing the game into disrepute”. A charge so obviously self-satirical that you can’t honestly believe it exists. And yet it does. It is football’s blasphemy law and if you’re found guilty of it, you have to be segregated in a special wing of an FA jail for your own protection.

Like I say, those aren’t all the types of respect holding back football from being its best self. But holding it back they are. After all, without wishing to travel too far from Corinthian ideals and whatnot, upstartery and disrespect is a lot of what makes sport great. There is something weirdly feudal – even aristocratic – about people demanding respect simply because of who they are or where they are, instead of realising that sport is supposed to be the ultimate meritocracy. Where everyone wants someone knocked off their effing perch. – Guardian service