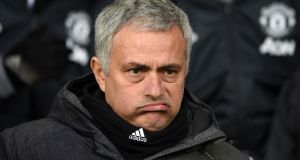 Title contenders have been dropping like flies in recent weeks, Manchester City’s apparent impregnability at the top of the table acting like one of those light blue insect zappers you sometimes find in chip shops, and the difficulty for everyone else now is how hard to chase when the race already seems won.

Antonio Conte admitted defeat some time ago and one can sympathise with the Chelsea coach’s complaint that no one is watching his club any longer, even though they are in a good vein of form and have won eight of their past 10 games.

Jürgen Klopp spoke at the weekend of Liverpool wanting to prove themselves the best of the rest, which is a legitimate ambition on Merseyside but would not hold as much appeal for Manchester United.

Neither José Mourinho nor his players could take much pride in finishing second if it turns out Pep Guardiola and City are streets ahead in first. United are actually on a decent run of their own, with only one defeat in seven league games since they lost at Chelsea, though there are no prizes for guessing the identity of the side that inflicted the most recent wound.

United keep coming second best to their neighbours and, even though this victory narrowed the gap to 11 points rather than 14 at the top of the table, that is still rather an ominous gap before the halfway point of the season has been reached. United have a perfectly respectable number of points for this stage of the season but City have already passed the half-century. United have scored 39 goals, at an average better than two a game, yet City are averaging out at better than three.

While there have been signs that Mourinho realises he is in a fight he cannot win, at least this was a fighting performance from his players. West Bromwich Albion are not exactly daunting opponents, they are in the bottom three and their first goal in four matches under their new manager came as a result of an untidy goalmouth scramble when United thought they were coasting to victory, yet they did their best to make life hard for their visitors.

For the first half hour they presented United with two solid lines of defence, usually compact in their own half, with only Salomón Rondón offering a notional outlet up front. United will have seen similar set-ups before and they probably relished the challenge of coming up against a parked bus as a break from positioning the vehicle themselves.

The obvious flaw in such a basic game plan is that it is difficult to respond if the opposition find a way through. City demonstrated that against United and Mourinho’s players were sufficiently superior here to take a patient approach against Albion.

For perhaps a quarter of the game there was a question of whether a midfield lacking Paul Pogba would be creative or forceful enough to break through the home barriers, and during that period, with Romelu Lukaku lumbering around in search of a pass or a useful opening, it was easy to make unflattering comparisons between United’s old-fashioned centre-forward approach and City’s more fluent front line.

Then Marcus Rashford pulled the ball on to his right foot to cross from the left and in an instant Lukaku was transformed from overpriced passenger to deadly finisher as a perfectly placed header flashed into Ben Foster’s top corner.

Lukaku may not be everyone’s idea of an €85m striker but there must be a reason why Chelsea and United were fighting for his services over the summer and given a glimpse of a chance to win this match he took it, no problem.

West Brom were never likely to come back from going behind, given how deep they had been operating, and before they reached the interval and a chance to reorganise they had conceded again when Ahmed Hegazi’s deflection helped Jesse Lingard’s shot beat Foster.

There could have been more from United, with Rashford showing up particularly well before he was substituted, yet there were also one or two nervous moments after Gareth Barry’s scrappy goal brought Albion back into the game.

So much so that Nemanja Matic ended up with a caution for time-wasting, while the home fans amused themselves with a few cheeky renditions of Park the bus, park the bus, Man Utd. Mourinho and his players will probably have to get used to that.

The title race may be over, but everybody other than City could be in for a long and trying run-in. – Guardian

Southampton and Wolves share the spoils at Molineux 22:20
How a visit from his barber helped Kyle Sinckler get back to his best 22:05
Mickey Harte is the new Louth football manager 21:59
Burnley hold out Crystal Palace for first win of the season 19:40
Giroud remains part of Chelsea plans, says Lampard 18:25

1 Mickey Harte is the new Louth football manager
2 The Offload: Ireland are stuck in no man’s land
3 Nicky English: Galway and Waterford face battles with fatigue in All-Ireland semis
4 How a visit from his barber helped Kyle Sinckler get back to his best
5 Every kind of wind imaginable was against Tipperary football - and they came through
Real news has value SUBSCRIBE