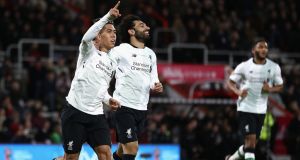 When Liverpool purr like this, delighting in every incisive move and swarming all over panicked opponents, it is hard to contemplate the reality they are a team only marginally closer to the top of the table than the condemned beneath the relegation cut-off. This was a performance to showcase all that is thrilling about Jürgen Klopp’s side, from Philippe Coutinho’s invention to Mohamed Salah’s bite, from the poise at pace in midfield to the relentless press which left Bournemouth gasping for breath. It would have been a stroll on the south coast had it not all been so blisteringly energetic.

Klopp could replace his entire front-line before the end, Roberto Firmino having plundered his team’s fourth, to allow Adam Lallana only a second cameo of the season and Sadio Mané an afternoon uninterrupted on the bench. This thrashing was implemented without a call for the Senegalese, with the hosts never threatening to overhaul the two-goal deficit, as they had last year, this time round. Liverpool are now unbeaten in 12 matches in all competitions. Manchester City may not be looking over their shoulders quite yet but, on their day, this team remains one of the delights of the division.

The glorious frenzy of last season’s collision between these sides, a seven-goal drama claimed in stoppage time by the hosts a little over a year ago, lingers in this corner of the south coast and, in truth, the prospect history might repeat itself was the only thing sustaining the locals by the interval. Just as in last December, Bournemouth had spent much of the opening period gamely chasing possession as they were out-passed and out-manoeuvred by Liverpool’s slippery front line. Here, just as then, they cracked twice around the midway point of the period. Critically, though, Liverpool’s ambitions extended further this time round.

The ease with which Klopp’s side sliced open the hosts was brutal at times. Adam Smith and Charlie Daniels were left dazed and confused by Coutinho and Salah, relentlessly tearing at and beyond their markers and supplied cleverly from midfield. There was simply too much space in which Liverpool could revel, Bournemouth’s defenders always a split second off their opponents’ ferocious pace. Coutinho had already struck the top of a post with a free-kick by the time the visitors eased ahead. By the break, their lead already felt unassailable.

It was Coutinho who dazzled most brilliantly. The Brazilian had collected from Ragnar Klavan 20 minutes in, exchanged passes with Andrew Robertson on the flank before using the left-back at his side as a decoy as he drove at Bournemouth’s back-tracking defence. The 25-year-old darted Simon Francis, bamboozled Lewis Cook, before finishing inside Asmir Begovic’s near-post. It was his 10th goal of a season that was supposed to have been wrecked by that unfulfilled summer move to Barcelona. He was irrepressible throughout, with his subsequent corner flicked up at the near post by Georginio Wijnaldum for the ball to loop up beyond the far upright. Daniels was convinced it was drifting behind, only for Roberto Firmino to hook the ball back and Dejan Lovren, alert and unmarked on the edge of the six-yard box, dived in to head home his team’s second.

Bournemouth had only sparked their remarkable comeback just before the hour-mark a year ago, revitalised by the introduction of Ryan Fraser off the bench. The Scot would be introduced at the break this time round though, by then, the home side had at least reminded themselves of Liverpool’s own fragility at the back. Wijnaldum was careless in the centre and Junior Stanislas, on for the injured Josh King, drove through the centre before slipping Jermain Defoe clear. Yet the striker’s shot rebounded back off the post, the visitors survived unscathed and, within minutes, had actually forged further ahead. Their third goal had been pilfered far too easily, Alex Oxlade-Chamberlain sliding his pass down the right for Salah to collect, cut inside Daniels and Nathan Aké, and find the far corner with his shot.

Their urgency did not subside, for all that Simon Mignolet saved well from Defoe and Fraser drove into the side-netting. Liverpool always boasted the more potent threat, their energy summed up by Oxlade-Chamberlain’s smart dispossession of Jordon Ibe, then charge forward beyond Smith and Francis. The resultant shot cannoned behind off a post, though the respite was only temporary. Whenever the visitors mounted sustained periods of pressure, pinning their opponents back, the hosts tended to crack. Cue Coutinho, granted time on the left, whipping over a centre which Firmino, suspiciously beyond the static defence, guided beyond the overworked Begovic at pace. The assistant’s flag never came and, with trips to Chelsea and Manchester City to come before Christmas in the Carabao Cup and Premier League, Bournemouth’s six-game winless streak may be prolonged. This was chastening. – Guardian service