Wilshere concentrating on securing his place in Arsenal line-up 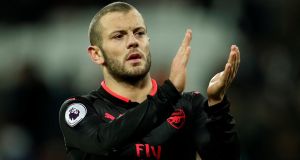 Jack Wilshere says there has been no progress on his new contract talks at Arsenal but he is focused solely on keeping his place in the club’s Premier League team.

The midfielder was the principal beneficiary of Aaron Ramsey’s hamstring injury on Wednesday night at West Ham United and he started his first league game of the season – and his first in Arsenal colours since May 2016.

Arsène Wenger felt that Wilshere “did well, overall” in what was a frustrating 0-0 draw, describing his performance as “satisfying” although he blazed over a good chance on 70 minutes.

The 25-year-old played on the right of a central midfield trio in a new-look 4-3-3 formation, with Granit Xhaka holding in front of the defence, and he is determined to stay in the line-up for the visit of Newcastle United on Saturday.

Wenger said at the beginning of November that he wanted to resolve Wilshere’s contract situation before the end of December; his deal is due to expire in the summer. The inference was that Arsenal may look to sell him if they do not offer fresh terms or Wilshere turns them down.

David Moyes, the West Ham manager, said on Tuesday that he would be interested in signing Wilshere if he became available, although the player has said many times that he wants to stay on at his boyhood club.

“No, there’s no update on the contract – we’re in the same position as we were two weeks ago,” Wilshere said.

“Nothing’s changed. There’s not really a date in the diary [for talks]. I’ve only read what the boss has said in the media. I’ve just played my first game in the Premier League. I’m concentrating on staying fit and staying in this team. That will look after itself. When it’s the right time to talk about it, I’m sure the boss will call me and we’ll have a chat.”

Wilshere was asked whether he was frustrated by the apparent stand-off. “Erm, not really,” he replied. “Because I’ve just got my first Premier League start. I’m buzzing, I’m happy about that. That’s the next step for me – to get into this Premier League team and try to stay in this team. There’s another game on Saturday and we’ll see what the boss does. At the moment, that’s all I’m focused on.

“This time of the year is probably the most important time of the season. The games come thick and fast. That’s a good thing because we dropped points against West Ham but we’ve got a chance to get three points on Saturday. We need to recover now and get ready.”

Wilshere has played in a more advanced midfield role in the Europa League, at times, this season and he was required to dig in defensively at West Ham, as well as try to push on and create. Wenger noted that he had “defended well”.

“You’ve got to be willing to fight and tackle – you’ve got to do everything,” Wilshere said. “It’s the Premier League. You’ve got to be able to go forward and defend to win the ball back, so that makes it a little bit different but I enjoyed playing in midfield and, hopefully, I’ll get some more opportunities. I was ready. I was just waiting for my opportunity. It came and I think I took it on well. I was happy to play the 90 minutes.”