England not counting their chickens after favourable draw 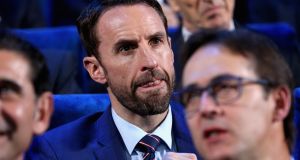 England appear to have been gifted one of the handier paths to the knockout stages of next summer’s World Cup although Gareth Southgate was quick to acknowledge that few nations have less cause these days to count their championship chickens.

“We’ve been good at writing teams off and then getting beaten by them, haven’t we?” said the manager ruefully as he pondered his side’s prospects. “We’ve got to make sure we prepare for those games.”

Southgate was speaking after his side was drawn in a group with Belgium, Panama and Tunisia. The English will be wary of Roberto Martinez’s men with the array of individual talent contained in the team well known to them given how many play in the Premier League but the coach himself may inspire a little less fear after the way his time there ended.

On paper, both sides should progress safely enough but Southgate is clearly keenly aware of the capacity for self destruction that England have demonstrated in their most recent tournaments with one point from three group games resulting in a first round exit from the last World Cup and one win from three setting them up for a second round humiliation by Iceland at the Euros in France.

Should the team come up as short again then next summer’s tournament may be every bit as unforgiving but if Southgate can succeed in getting more out of the team in Russia then a place in the last eight certainly looks certainly looks to be an achievable target now as Group H, which includes Poland, Senegal, Colombia and Japan will provide the second round opponents.

The objective is to qualify from the group,” said Southgate. “There’ll be ups and downs along the way I’m sure (but) we’ve got to focus on the first game and go from there.”

His side has, he admitted, been fortunate in terms of the travelling they will have to do too with fears before the draw that their decision to base themselves 30 miles outside St Petersburg might leave them with especially long return journeys to overcome allayed when both Ekaterinburg and Samara were avoided.

England will face a thousand mile trek to Volgograd (once Stalingrad) for their opener against Tunisia – the same opponents they faced in their first game of France’98 when Southgate played – but their remaining games will be closer to home, so to speak, with Panama to be played in Nizhny (formerly Gorky) and Belgium in Kaliningrad.

Tickets and accommodation for that last game are likely to be an issue for fans but Southgate will not be overly upset if there is not too much riding on it. Having to beat a Belgium side that boasts the attacking talents of Kevin De Bruyne, Eden Hazard and Romelu Lukaku might just make for another disaster.

“Belgium are an outstanding team,” he acklnowledged. “They’re ranked where they are (fifth in the world) because of the quality of players they’ve got. That is top quality opposition but a great game to prepare for.”

1 Ken Early: Liverpool fans, Bamber Gascoigne and a close shave in Istanbul
2 Sideline Cut: Vignette shows why Bird is the true shark in The Last Dance
3 World Rugby study advises removal of reset scrums to reduce Covid-19 risk
4 Coming fourth in the Olympics didn’t change this fearless quartet, time did
5 Argentina rugby great Hugo Porta continues to give back to his beloved game
Real news has value SUBSCRIBE
Crossword Get access to over 6,000 interactive crosswords