Lukaku and Rashford on target as Man United top Group A

CSKA’s controversial opener cancelled out by second half salvo 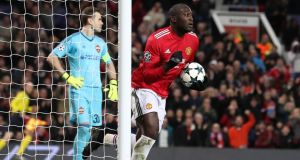 It scarcely counts as a shock that Manchester United have secured their place in the knockout stages of the Champions League for the first time in four years. It may be more significant that they go into Sunday’s Manchester derby buoyed by a fourth consecutive victory and that Romelu Lukaku’s fine goal could end his barren run.

By beating CSKA Moscow they won Group A. As only a seven-goal defeat, coupled with a Basel win against Benfica, could eliminate them, United’s progress appeared guaranteed. Their 100 per cent home record this season and their club-record unbeaten run at Old Trafford were under rather greater threat when CSKA scored a contentious, but correctly awarded, opener.

The low-key nature of the buildup appeared to be summed up by the absence of the Champions League anthem. A malfunctioning CD was the reason, but if the mathematics suggested United would hear it again in 2018, so did their swift start.

Lukaku pierced the CSKA offside trap to release Marcus Rashford and the England striker’s angled shot bounced back off the inside of the post. Rashford came close again with a low effort goalkeeper Igor Akinfeev repelled after Juan Mata met Daley Blind’s long pass with a deft piece of control. Each opportunity suggested a CSKA back three with a combined age of 102 would struggle to contain a 20-year-old as mobile as Rashford.

Another youngster looked similarly sharp. Luke Shaw made his first start for 219 days as he belatedly returned to the Champions League for the first time since his horrific leg break against PSV Eindhoven in 2015. He played with the air of man with a point to prove and almost marked the occasion with a first senior goal. Shaw met Antonio Valencia’s deep cross with a crisp volley. Akinfeev did well first to parry it and then to stop Lukaku from bundling in the rebound.

Rashford had been introduced as José Mourinho made six changes. Just as instructive, however, was who he did not select: for the fifth time in six games Henrikh Mkhitaryan was omitted from the 18 even as United were deprived of seven injured or rested players.

CSKA were being watched by their former manager Leonid Slutsky, two days after his brief spell in charge of Hull ended. They had belied their image as poor travellers to win their first two Champions League away games. Their attempt to make it an unlikely hat-trick gathered momentum on the stroke of half-time. Mário Fernandes, played onside by Chris Smalling, cut the ball back for Vitinho to shoot. The Brazilian’s effort went past Sergio Romero in bizarre fashion, deflected in off the back of Alan Dzagoev. The United players protested that the Russian was offside but Blind, in attempting to intercept Fernandes’ cross, had slid off the pitch.

United increased the pressure, with Akinfeev denying Rashford. Mata was the next to fashion an opening, hooking a cross to the far post where Smalling miscued his header. Rashford’s assault on the visitors’ goal continued with a free-kick that was deflected wide after Vasili Berezutski resorted to the illegal to halt Paul Pogba. The French midfielder was making his last appearance until 20 December after United accepted his three-match domestic ban for his red card at Arsenal.

United’s record buy had been more muted than he was at the Emirates Stadium until he chipped an inviting pass over the visitors’ defence. Lukaku met it at full stretch, volleying in just his second goal in 13 games. One goal swiftly became two. Lukaku won a flick-on, Rashford exchanged passes with Mata and angled a shot beyond Akinfeev.

The goalkeeper had kept his first Champions League clean sheet since 2006 against Benfica last month. For an hour, it had appeared a second in successive games was on the cards. Instead, a lead was turned into a deficit by two goals in two minutes.

Mourinho then took the opportunity to remove Ander Herrera, Valencia and Lukaku, three who will surely be in Sunday’s starting XI. The youngsters Scott McTominay and Axel Tuanzebe were afforded rare outings on this stage and the midfielder marked his arrival by getting booked. With all three substitutions made, there was a moment of concern when Shaw went down but he only seemed to be suffering from cramp.